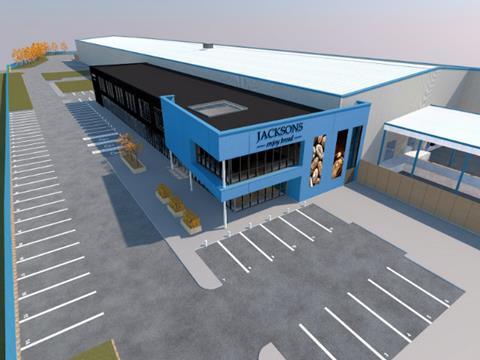 William Jackson Food Group is ploughing £40m into a second bakery to take advantage of the booming food-to-go sector and support continued growth at its Jacksons bakery subsidiary.

The new facility has been designed specifically to make bread for sandwich manufacturers and food service customers.

The bakery will be built on a 10-acre site on an industrial estate in the East Midlands, purchased by Jacksons in February this year.

Corby Borough Council has approved the business’ plans, with the new production site set to create about 100 jobs initially and provide additional support to Jacksons main bakery in Hull, which currently makes two million loaves of bread a week.

“The group and its family shareholders have invested significantly in the Hull bakery over recent years, and indeed continue to invest in the Hull site,” said Norman Soutar, CEO of William Jackson Food Group.

“We take a long-term approach to the individual businesses in the group, allowing them time to grow and develop and we’re very much looking forward to seeing how the next chapter of the bakery’s life unfolds.”

Jacksons has baked bread on the same site in Hull since 1907 and can trace its roots back to 1851. It is part of the £315m-turnover William Jackson group, which also owns Aunt Bessie’s, Abel & Cole, MyFresh and The Food Doctor.

The bakery subsidiary has boosted revenues by more than 30% in past five years from £42.5m to £61.1m, with 7% growth in 2015/16. However, profits have taken a hit as dwindling consumer confidence and pressure on retail prices squeezed margins.

Jacksons makes 70% of the bread used in the UK prepared sandwich industry, as well as supplying its own brand to supermarkets.

Jackson’s Yorkshire’s Champion, which has grown every year since its launch in 2012, will continue to be produced at the Hull bakery, Jacksons MD Simon Ball said.

“The new bakery will help us grow as a business and allow us to build on the great work we do in Hull,” he added.

“We have a brilliant team working on the expansion project, and there’s a real buzz of excitement right across our business as we have the opportunity to create something really special that will be at the forefront of bread making in the UK.”