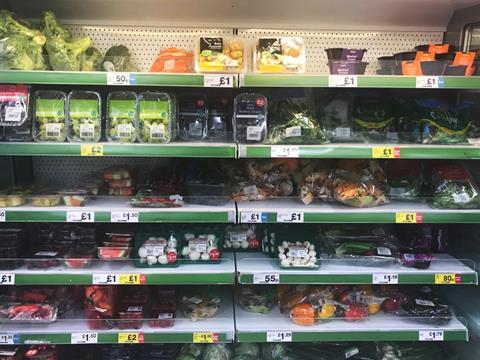 Iceland was the worst performing in the study, which found on average 84% of fruit and veg sold in supermarkets is plastic-packed

More than 95% of Iceland’s fresh produce is sold in some form of plastic packaging, according to new research by British Growers Association’s Produceview.

The retailer, which has pledged to go plastic-free across its own label range by 2023, was the worst performing in the study, which found on average 84% of fruit and veg sold in supermarkets is plastic-packed.

Iceland has been leading the charge on plastic reduction with its commitment on own label packaging and the installation of reverse vending machines to pave the way for a possible deposit return scheme. Last week, it announced it would trial replacing plastic bags with paper bags at a selection of Merseyside stores.

However, the retailer said it should “come as no surprise” it came bottom of the table on plastic use in the produce fixture, because it does not sell loose fruit & veg.

“In fresh produce, work is currently underway to replace plastic packaging of soft fruit, mushrooms and potatoes, and we are working with our suppliers to develop alternative packaging for other produce lines in the medium term,” said Iceland’s director of corporate affairs Keith Hann.

“In developing these alternatives, we attach high importance to identifying packaging that does not compromise shelf life or risk increasing food waste, and ideally improves performance in both these areas.”

The most common form of packaging throughout all retailers surveyed was plastic wrap, accounting for 49% of produce packaging, the report found, with loose fruit & veg taking second place at 16%. Other forms included plastic trays with wrap, trays with film, nets and plastic punnets.

Morrisons had the highest percentage of loose produce, with 21% of its fresh produce SKUs sold without any packaging at all, while Sainsbury’s, Asda, Morrisons and Lidl were the only retailers to use only paper or card to package some items.

Brassicas were most likely to be wrapped in plastic, which industry sources put down to the fact cauliflowers and broccoli tended to shed heads if left loose. However, 80% of supermarket potatoes were also found to be sold in plastic, while the majority of mushroom were sold in plastic trays with overwrapping.

“These findings should give retail bosses some food for thought. Our supermarket shelves are awash with pointless plastic packaging, none more so than fruit and veg aisles,” said senior oceans campaigner at Greenpeace Louise Edge.

“Some say it’s needed to keep produce fresh, yet retailers often sell the exact same items in loose form too. Marketing seems to be the only reason for all this unnecessary plastic wrapping, but it’s a poor excuse for adding to the mountain of plastic rubbish threatening our oceans. It’s about time UK retailers took responsibility for the huge amount of single-use plastic they put in circulation. They should move fast to ditch pointless plastic and replace the rest with safer alternatives.”

ProduceView audited more than 3000 products, across 19 geographically scattered stores as part of the study, covering the big four, the discounters, M&S, Waitrose and the Co-op.