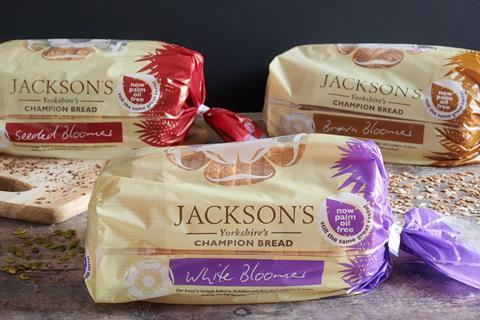 Jackson’s Yorkshire’s Champion Bread has removed palm oil from its entire range of wrapped loaves – which it claims is a first for a mainstream bakery brand.

The result of about a year’s work, the reformulated offer is rolling out this week to Waitrose without any ingredients replacing the sustainable palm oil previously used.

Jackson’s had simply “reformulated the recipe again and again until we were happy we had exactly the same product without the need for palm” said the Hull-based business.

While other breads were already available without palm oil, they were “specialist stuff like sourdough and gluten-free” said Jackson’s, which produces a portfolio of sliced bloomers. Palm oil was popular with makers of mass-produced bread as it helped “to stabilise the dough” and “produce a more consistent loaf in terms of texture, with superior quality and freshness”.

UK bakery’s biggest names – including Warburtons, Hovis, Kingsmill and Roberts – still use palm oil, which is relatively inexpensive and practical due to its high melting point.

Producing bread without palm oil was “not an easy thing to do” said Jackson’s, though the process had not incurred additional expenses for the WJFG-owned brand. As a result, its rsps have not changed.

The move came as grocery suppliers were “increasingly alert to the impact unsustainable palm oil can have on the environment” it added. “While many brands back sustainably sourced options, campaigners continue to highlight the devastation caused by unsustainable palm.”

Often criticised for the destructive impact its production has on rainforests, palm oil is the most consumed vegetable oil on the planet. Around 70 million tonnes were produced globally in 2018, according to commodities consultancy LMC International – and the WWF estimates palm oil is found in around half of the packaged goods on supermarket shelves.