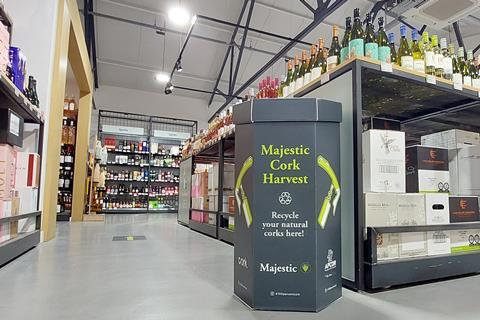 The new scheme would be the ‘first of its kind’ in the UK, said Majestic

The retailer has unveiled plans to work with the Portuguese Cork Association (APCOR) to recycle over a million corks per year.

The scheme will see collection hubs installed in its all 201 of its UK stores, where customers will be encouraged to deposit used corks.

Once collected, the corks will be sent to the Eden Project in Cornwall, where they will be broken down and used as mulch around its Mediterranean plants.

The new scheme would be the “first of its kind” in the UK, said Majestic.

Although cork recycling programmes had rolled out in other parts of the world, similar schemes had not been available in the UK until now, it added.

“As a national retailer, we’re always looking at ways we can pull our weight in the climate crisis,” said Majestic CEO John Colley.

Through its work with APCOR, Majestic would give its customers and stores “the opportunity to continue a natural cork’s journey”, Colley added.

Last July, the retailer unveiled plans to open new stores after enlisting a surge of new customers during the pandemic.

Despite closing its stores over lockdown, Majestic grew its customer base by 150,000 thanks to implementation of a local delivery service, with online sales growing by 300%, it said.