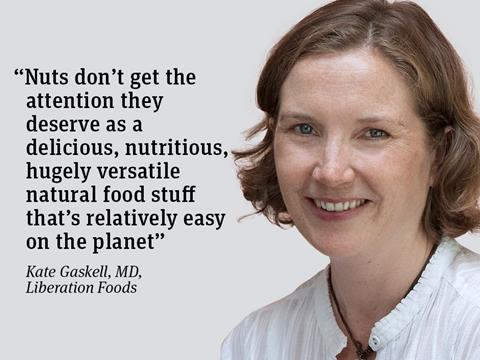 At Liberation we are adding our voice to the public debate about sustainable protein and we fully support ‘The Protein Challenge 2040’ recently issued by Forum for the Future.

The world cannot continue to rely so heavily on animal-derived protein to sate its ever-increasing appetite - note China’s recent pledge to cut meat consumption by 50%. Media coverage tends to focus on outlandish protein alternatives such as insects and lab-produced meat, but I remain convinced nuts don’t get the attention they deserve as a delicious, nutritious, hugely versatile natural food that’s relatively easy on the planet and, in Liberation’s case, sustains vulnerable producer communities.

While so-called ‘developed’ countries may hog the majority of the world’s financial wealth, when it comes to wisdom, we’ve lost our way in a number of areas. Where is the wisdom in meat consumption in the US being over 100kg per person per year when nutritionists advise that we actually need less than a fifth of that?

Liberation’s founders and majority shareholders are small-scale nut producer co-ops in Bolivia, El Salvador, India, Malawi and Nicaragua. We believe in empowering and learning from previously marginalised people, and spreading the word. Our vision is a world in which small-scale nut producers can enjoy secure livelihoods and plan for the future. And whether you live on a sub-tropical cashew farm in India or commute into Liverpool Street every day like I do, we all deserve a healthy diet.

In Nicaragua our producers have invested Fairtrade premiums into a ‘community shop’ where they sell nut-based foods and work hard to encourage locals to stick to locally produced protein sources. Our cashew producer co-op in Kerala has also invested in indigenous crops. These farmers live on ‘homestead’ farms where they grow cashews as an export crop, and food for their family. Until recently their staple has been rice - despite the fact that Kerala’s topography is not well-suited to its production. So the members of the co-op Fair Trade Alliance Kerala are switching to the tubers that were the traditional staple. Now they ‘grow their own’ - cutting food miles, improving soil quality, saving money and re-introducing a natural protein source into their diets.

Rebalancing consumption of animal, plant and ‘alternative’ protein among consumers is key to mitigating negative impacts across the protein system, on human health, greenhouse gas emissions, water use, land use change and habitat loss.

How are we going to feed nine billion people enough protein by 2040, in a way that is healthy, affordable and good for the environment and what responsibility does the food industry have in making this a reality? Companies like Marks & Spencer have already made quiet in-roads, focusing on fish-based NPD to subtly shift consumer behaviour. Now is the time to give nuts the same treatment and broaden our repertoire to include curries, burgers, smoothies, pestos and - the best dessert I’ve eaten this year - cashew cream cheesecake. Treat yourself on National Nut Day coming up on 22 October.