Recycling is not enough. The only way to tackle the plastic crisis is to make less plastic 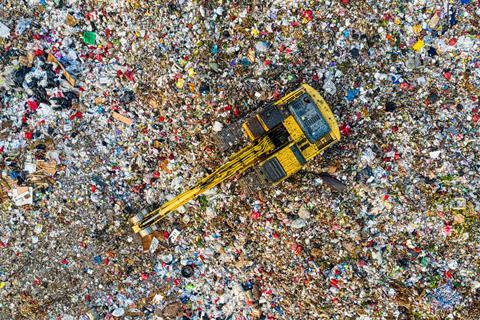 For decades now, we have treated recycling as the carpet to sweep our ever-growing plastic waste problem under

Recycling is getting a bad reputation. If the green loop sign was an actual brand, this would be the time to ring up the best publicist around and get some sound PR advice. Last week, millions of people watched news reports about UK plastic recycling being dumped in burning heaps at the side of Turkish roads. They must have wondered whether their own plastic waste had met a similar fate.

And yet the problem is not the recycling system itself, but how we have been using it.

For decades now, we have treated recycling as the carpet to sweep our ever-growing plastic waste problem under. And while the carpet did a reasonable job of hiding all that plastic waste we weren’t recycling, it isn’t a magic carpet, and the waste never really disappeared. When you pull the carpet back, there it all is, slowly bleaching on beaches, choking our rivers, contaminating every part of our environment, and our bodies.

After Americans, Britons are the biggest producers of plastic waste in the world. We carefully separate it, local councils deliver it into the hands of an opaque waste management industry, and eventually, less than 10% of that plastic gets recycled in the UK. The rest of it? Under the carpet. Burned in incinerators or landfilled if we’re lucky, and burned outdoors or dumped in rivers and ditches if we’re not, often after being shipped halfway around the world.

We export enough waste plastic each day to fill three and a half Olympic-sized swimming pools, largely to countries you would expect to have weaker regulation and less developed recycling industries than the UK. And you’d be right. Greenpeace has just published a report showing the impacts of our plastic ‘recycling’ system in Turkey, currently the biggest importer of the UK’s plastic waste. The photos of British rubbish piled up or burned in the Turkish countryside are an embarrassment for both nations, and Turkey at least has started backing away from this shameful trade.

Can the UK’s plastic recycling infrastructure be scaled up to solve the problem? Not on its own. We’d need to enlarge it by an entire order of magnitude, and while we were doing that the plastics industry, left unhindered by any new government regulation, will have increased production yet again, of a material that can only be recycled a few times. But with the countries we ship rubbish to now closing their doors to us, something needs to change. The solution is the most obvious thing in the world: make less plastic.

If plastic waste producers took full financial responsibility for the disposal of their products, you can be certain this would be happening very rapidly indeed. The average piece of single-use plastic packaging provides society with far greater costs than benefits, and if the same people who get the benefits paid the costs, things would change. Sainsbury’s and Aldi have both grasped which way the wind is blowing on this issue, and pledged to halve their single-use plastic by 2025. It can be done. The UK government must step in and turn industry best practice into the industry standard – a 50% single-use plastic reduction by 2025 – while supermarkets must aim to achieve 25% of that by replacing single-use plastics with reusable packaging. The government has set ambitious environmental targets in other areas, so why not plastics?

The failure of plastic recycling is not a new discovery. Everyone even tangentially involved with the industry has known what is happening for many years, and during the last few years, pretty much everyone else has found out. A recent Times/YouGov poll showed plastic pollution was the UK public’s biggest environmental concern. But politicians and corporations still think they can make some concerned noises, introduce some minor changes and hope everyone loses interest. The British supermarket sector has been doing exactly this – announcing how much they care, making a show of reforming some high-profile offenders, but not cutting their total plastic waste at all. Last week should have been a wake-up call for them.

People are not going to forget about this issue, because the bump under the carpet isn’t going anywhere. It keeps on getting bigger, and the supermarkets have plastered their names all over it.