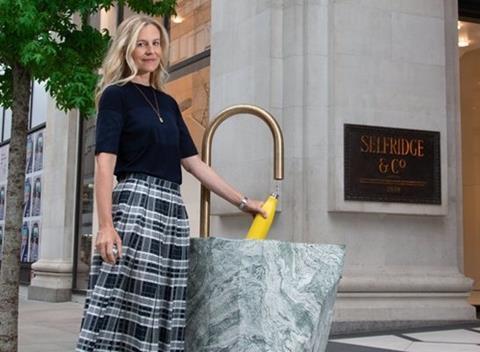 Alannah Weston, deputy chairman of Selfridges Group, uses one of the new fountains

Selfridges has installed a public water fountain at its London branch to help reduce plastic use.

Selfridges introduced the water fountain outside the new Duke Street entrance to its London store to make water more accessible for its customers and the public, encourage use of reusable bottles, and help reduce plastic pollution in the ocean.

The retailer also launched its own global awareness campaign for marine conservation, Project Ocean, in 2011 with the Zoological Society of London and the Marine Reserves Coalition.

“Plastic poses a huge threat to our oceans and one that will continue until we all make bigger commitments to saving our oceans,” said Alannah Weston, deputy chairman of Selfridges Group. “We have supported the #Oneless campaign since 2016, which has now seen the Mayor of London promise to improve access to drinking water across London. We hope our civic water fountain will encourage customers and businesses alike to go #Oneless.”