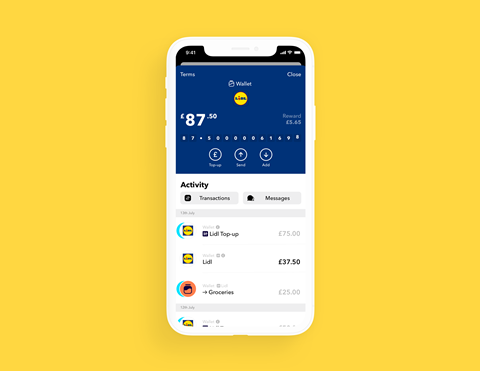 London startup HyperJar is making it’s ‘pay now, buy later’ app available to all merchants from next month, following a trial with Lidl and other retailers late last year.

The app turns the “turns the notion of buy now, pay later on its head” allowing users to put money into ‘jars’ that they can only spend at designated retailers. Transactions are made in store using a pre-paid physical HyperJar contactless Mastercard.

In return for ‘pre-paying’ the store, users are rewarded with a 4.8% growth rate – paid daily – on the amount they ringfence.

Merchants benefit from being able to communicate and send promotions to customers who have committed funds to them.

“Many of us have untapped value inside our brains: knowledge of where we are going to shop in the future. This ‘intent data’ can be monetised,” said HyperJar communications chief Tricia Beaumont.

The company said one of its lead partners had seen the transaction size of app user customers average at 30% higher than non-user customers.

Having partnered with discounter Lidl as well as Shell, Virgin Wines and online florist Bloom & Wild in October, the app is now being made available to merchants of all sizes.

Beaumont said the service would “replace banks” and “help resurrect the fast-deteriorating British high street, saving shops of all sizes”.