Co-op calls on government for better shopworker protections against abuse 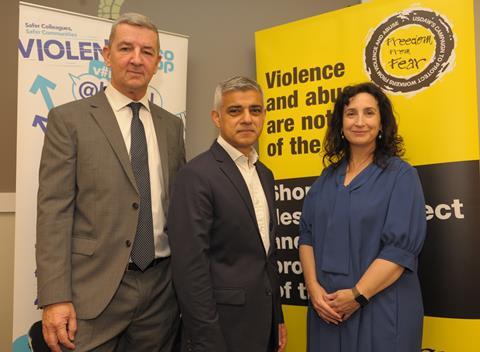 Co-op has called on the government to take radical action to help better protect UK shopworkers in the face of a retail crime “epidemic”.

The retailer, along with Mayor of London Sadiq Khan and the Usdaw trade union, attended the launch of a programme of events to raise awareness of abuse faced by shopworkers.

Usdaw’s ‘Respect for Shopworkers Week’ is promoting the message that threatening behaviour and abuse towards shopworkers is unacceptable.

Forming part of the union’s ‘Freedom from Fear’ campaign, union representatives around the country will be hosting activities that encourage shoppers to ‘Keep Your Cool’.

“Shopworkers across the UK should be able to go to work every day, safe in the knowledge that they will not be attacked, abused or made to feel unsafe,” said Co-op Food CEO Jo Whitfield.

“Sadly, this is not a true reflection of what’s happening in stores up and down the country and I am here, on behalf of my Co-op colleagues, to support Usdaw as we stand together and say: enough is enough.”

Co-op has invested more than £70m in colleague safety, including the installation of remote-monitored CCTV, communication headset devices rolled out to all front-line staff and Smartwater fog cannons.

“Co-op research shows that store crime has reached intolerable levels. Whilst the retail industry is doing everything in its power to prevent attacks, five months on from the Home Office’s own call for evidence we are calling upon the government, along with law enforcers, to accelerate action to help us develop a strategy which can address this epidemic of violence. Systemic change is needed to address not just the symptoms, but the root cause. We cannot wait any longer.”

The research - undertaken for Co-op by criminologist Dr Emmeline Taylor from City University of London and released last month - showed that violence in the sector was at its highest level since 2012, with latest statistics showing that workers fall victim to 42,000 violent incidents, with 115 colleagues physically attacked every day.

A Home Office call for evidence, to aid its understanding of the problem, received feedback from more than 600 Co-op colleagues who shared their own experiences of violence and abuse.

Usdaw deputy general secretary Dave McCrossen said: “We launch Usdaw’s 2019 Respect for Shopworkers’ Week as violence, threats and abuse continue to be growing issues for retail staff. We have been working with a number of employers to tackle abuse against retail staff and campaigning with politicians, police forces and the Home Office on the impact of violence against shopworkers.

“As a result of the government’s austerity programme, 20,000 police officers have been taken off the streets, meaning that over 40% of retail workers have never seen a police officer patrolling their store. Government changes have also meant that shoplifting under the value of £200 is now unlikely to be dealt with as crime or anti-social behaviour. Not only is this appalling threshold actively encouraging so called ‘low-level’ crime, it also completely fails to account for the impact that retail crime has on the workforce.

“Usdaw is committed to campaigning for an Assaults on Retail Workers Bill. At the same time, we need to ensure that there are enough police officers on the streets to be able to enforce the law. Shopworkers already start to believe that abuse is now an expected part of the job and that there is nothing that can be done about it. Usdaw is clear that abuse is not part of the job.”

Mayor of London Sadiq Khan added: “I’m proud to support Usdaw’s excellent campaign to help keep shopworkers safe. It’s simply unacceptable that, for every minute of the working day, a shopworker is verbally abused, threatened with violence or physically attacked.

“Nobody should have to go to work fearful for their own safety. That’s why I applaud Usdaw, the Co-op and everyone in the retail sector who is sending out the message that threatening behaviour and abuse towards shopworkers will not be tolerated.”