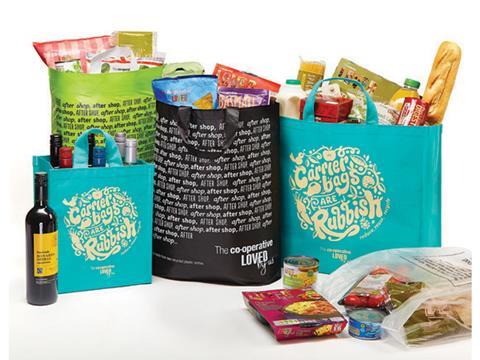 The Co-operative Group has pledged to donate profits from its entire bag range to charity when the 5p carrier bag charge comes into effect in Scotland later this month.

From 20 October, all retailers in Scotland will have to charge shoppers 5p for a single-use carrier bag and donate the profits from that charge to charity.

However, The Co-op Group has said it will also add the money it makes on the Scottish sales of its new reusable large shopping bag, small shopping bag and foldaway bag (all rrp £1), bag for life (10p) and compostable bag (6p).

The society said it expected to raise £750,000 in the next 12 months from the move, which would be reinvested in community projects across Scotland.

“By going much further than we need to we’ll raise hundreds of thousands of pounds extra for good causes,” said John McNeill, regional stores director for The Co-operative Food in Scotland.

“It’s not just a commitment to local communities though, we also have a strong commitment to the environment and we share the aspiration of reducing the number of single-use carrier bags that are distributed,” he added.

“By buying any of our range of carriers, customers will be contributing to the environment, as well as to good causes.”