5
Milk and health: Are mixed messages damaging to dairy?
The Dairymen 2016

Milk and health: Are mixed messages damaging to dairy?

Has conflicting scientific and pseudo-scientific advice confused the consumer? And how can the dairy industry fight back?…

Is milk good for you? Yes, if it’s cockroach milk, claim scientists at the International Union of Crystallography. It published a snappily titled research paper (‘Structure of a heterogeneous, glycosylated, lipid-bound, in vivo-grown protein crystal at atomic resolution from the viviparous cockroach Diploptera punctate’) in July that said cockroaches secrete ‘liquid milk’ so rich in protein it’s been dubbed the latest superfood. That may be so. But milking a cockroach sounds fiddly. Plus you’d have to milk a lot of them to fill a bowl of cornflakes. And what’s wrong with old-fashioned cows milk anyway?

That depends on who you ask. The health credentials of milk have proved extraordinarily divisive in recent years. Books, newspapers and the internet are awash with conflicting theories on both sides of the argument, with sources ranging from scientific research to conspiracy theory. On one side people are branding milk a ‘white poison’ that causes cancer, while on the other they are hailing milk as a rich source of nutrients that’s beneficial for human health.

Subscribe now to read more Dairymen articles, insights and analysis into the market to assist with your day-to-day role.

The end result is mass confusion as consumers are hit with a blizzard of mixed messages over dairy products like milk, butter, cheese and yoghurt. So has this flurry altered a typical consumer’s health-related perceptions of dairy? And if so, how can the dairy industry reinforce positive health messages?

“Milk is an amazing product but it’s easy to see why consumers are confused about the health benefits,” says Andrew Howie, co-founder of milkshake specialists Shaken Udder. “Over the last decade we’ve seen mixed messages from health organisations, government bodies and competing companies. The official line has changed so frequently that consumers have been left confused and bewildered.”

To tackle that there needs to be “good marketing of the correct information, combined with great products and awesome brands” he adds. “And we need the support of the FSA and The Dairy Council to educate and communicate this. We want to shout about milk from the rooftops, but we need a consistent and understandable message for customers.” 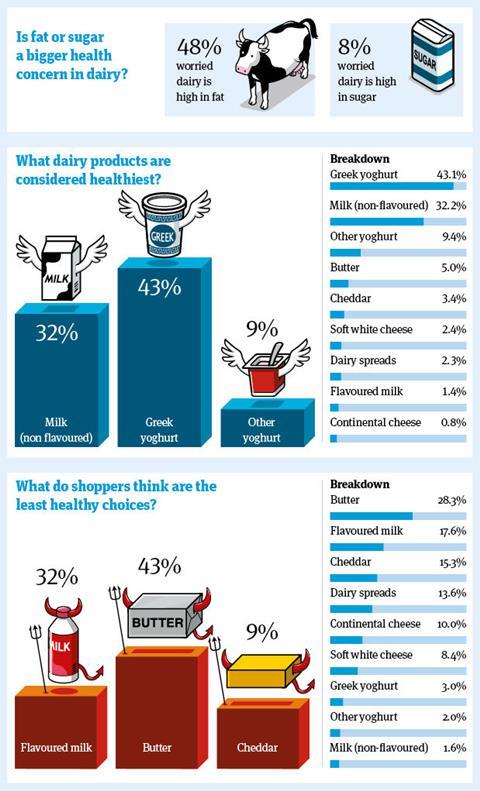 The trouble is messages are hitting consumers from all angles. And it does appear to be having an effect, with alternative milks increasingly popular. According to the AHDB, total milk market volumes rose just 0.8% in the year to 27 March 2016 to 41.4 million litres, but the volume of alternative milk types (non-cows and plant-based milks such as almond, soya and rice milk) rose 30.5%, compared with the modest 0.5% growth of pasteurised milk.

“One week we are a superfood, the next week we are killing people,” says Dairy UK CEO Judith Bryans. “So much of the information is presented as definitive science when that’s not the case. But it’s a great thing for anti-dairy groups to latch on to because it’s complicated, so consumers get confused, and misconceptions perpetuate.”

Bringing clarity to the debate is difficult because “the way consumers consume information is very different from how it was a few years ago,” she adds. “People crowdsource their information from friends, family and the internet. When you do an internet search you get worldwide results. We need to link in to what the rest of the world is doing in terms of social media and linking up with affinity groups like GPs and health professionals.”

One of the most damaging claims for the worldwide industry to address is that milk can cause cancer. The volume of internet chatter over the issue is huge - if you Google ‘Justin Bieber’ you get 99.6 million hits. If you Google ‘Milk Cancer’ you get 94.8 million.

Another damaging myth is that dairy is high in fat, as shown by a poll of over 2,000 UK shoppers carried out exclusively for The Grocer by Harris Interactive in July. Asked “what, if any, health concerns do you have about ‘milk’, ‘yoghurt’, ‘cheese’, ‘butter’, ‘dairy spreads’?” the most popular responses were ‘high in fat’ and ‘high in calories’.

Shaken Udder’s Howie recalls a woman complaining about the amount of fat in whole milk (3.5%) while munching on a rice cake covered in chocolate (fat content 24%). “We use semi-skimmed milk but we’re often approached by members of the public concerned by the fat levels in whole milk. I asked her to look at the fat content of the rice cake and she was amazed.”

“I think the UK dairy industry has done itself a disservice over the years by adopting the names full-fat, semi-skimmed and skimmed,” says Bryans. “Because we call milk ‘full fat’ when it’s whole milk, consumers think it’s full of fat. Whole milk is 3.5%. Semi-skimmed is 1.7% fat. There is no way they are high-fat products.”

So why doesn’t the industry just drop the terms full-fat, semi-skimmed and skimmed? “Perhaps that is something we should look at,” says Bryans. 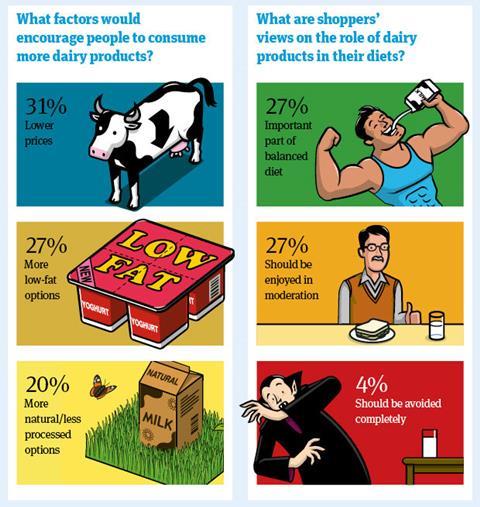 Producers should also be reinforcing the message that dairy can be “part of a healthy and balanced diet,” says Lisa Harrison, UK brand manager for Norseland. “It can be useful to highlight portion control products like our individually wrapped cheese sticks so health-conscious consumers can keep a closer eye on their nutritional intake.”

“In our trial, drinking milk or an oral hydration solution helped people retain a third of fluid they consumed over a two hour follow-up period and remain hydrated for over four hours,” said Dr Stuart Galloway from the university of Stirling. “Normally when you drink, it signals the kidneys to get rid of the extra water by producing more urine,” said the lead author of the study, Dr Maughan. “However, when beverages contain nutrients and electrolytes like sodium and potassium, as milk does, the stomach empties more slowly with a less dramatic effect on the kidneys.”

“Now we have the science to show milk is good for a sports drink,” says Bryans. “It contains natural electrolytes, which help you rehydrate, the protein in milk is good for muscle and muscle recovery and you have carbohydrates in the form of lactose, which is good for energy. Wendy Martinson is the nutritionist for the Team GB rowing team and she uses a lot of milk.”

Some of the misconceptions around butter and fat and satfat are also starting to be addressed, she adds. But it’s a “long-term thing and we have to keep going at it. As an industry we need to keep plugging away about the integrity of our product and emphasise that it’s nutrient-rich. You can never stop addressing it because there will always be an anti-dairy message out there. So there is no end game.” 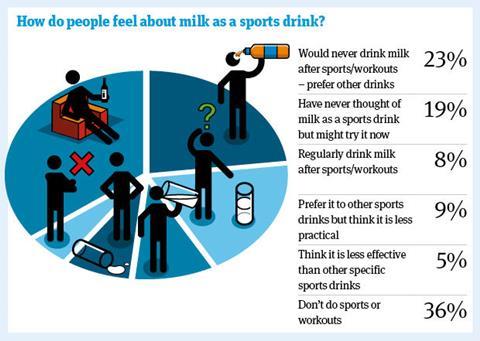