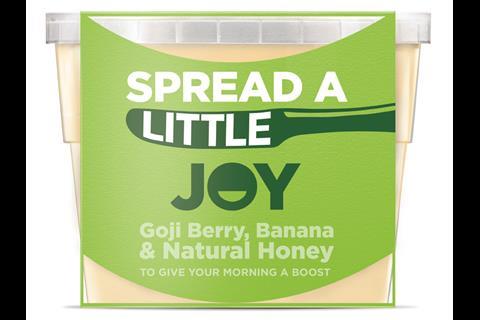 Brightly branded Spread A Little comprises blends of spreads and functional natural ingredients. Adopting a strategy already successfully employed by some hot beverage suppliers, the products are targeted at consumers’ emotional needs, and the branding employs a conversational tone. With ingredients such as goji berry, flak and beetroot, Spread A Little also directly taps some of the current major food trends. 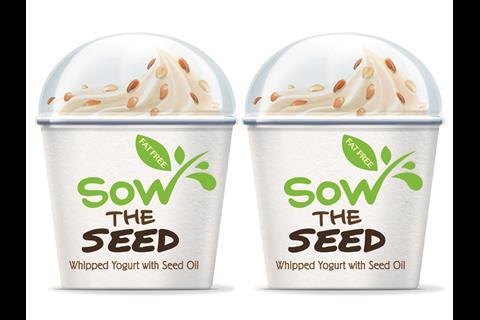 Stretching the definition of what a spread can be, Sow The Seed is a blend of whipped yoghurt and seed oil that is sprinkled with seeds. The attractive result is shown off in a stylish tub with a clear dome lid, and wood-effect shelf-ready packaging is employed to extend the natural feel of the product. While consumers might need convincing about the idea of spreading yoghurt on their toast, home cooks are increasingly using yoghurt as an ingredient in savoury dishes. Meanwhile, the profile of whipped yoghurt is set to be raised by Bliss Corner, launched in July by Müller. 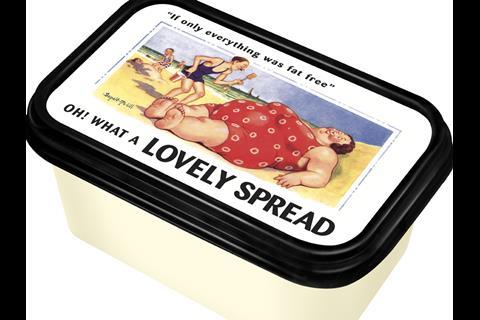 Some spreads packaging can be a little dull, and Springetts wanted to suggest the market didn’t have to take itself so seriously. Oh! What a Lovely Spread is inspired by classic British seaside postcards, and would help consumers start the day with a smile. The artwork could be a removable card insert usable as a postcard, and the range has the potential to become a collector’s item and offer limited editions. 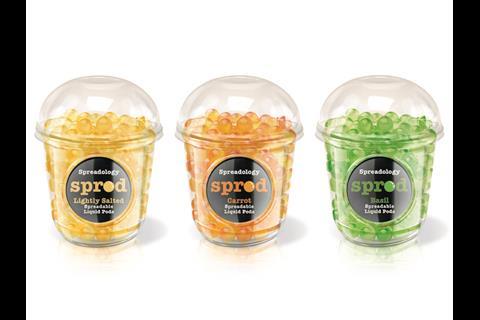 Springetts tore up the rulebook with the Sprod concept, which takes the idea of the bubbles used in bubble tea drinks and extends it to the food market. The result is Sprod, tapioca balls containing flavoured vegetable oils (and ‘none of the bad trans fats of spreads’). Sprod is designed to be a very flexible concept, and the pods could be burst on toast, as well as used for frying or on salads. Combining a number of Sprods would enable consumers to create their own unique flavours and provide a decorative addition to any dish. 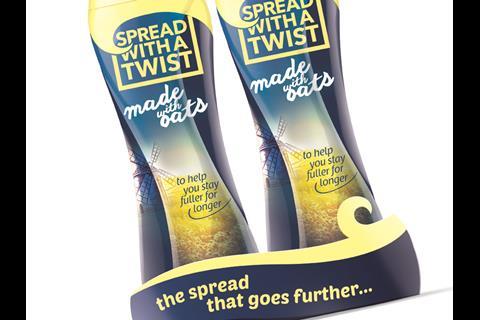 Oats are a hot property – as shown by the continuing boom in convenient porridge formats – and Spread With A Twist is designed to tap this directly. With a blend of traditional spread and oats, the product would be marketed on the message that it can help consumers feel fuller for longer, and that what they put on their toast can help to keep them going during the day. It is packaged in a tube that is twisted by the user to deliver a sized portion of spread. 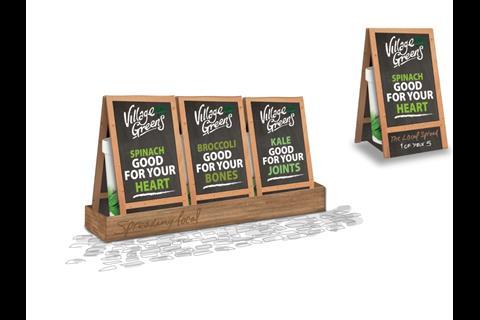 The Village Green range comprises spreads fortified with ingredients including spinach and kale, and are aimed at consumers who know they should eat their greens by can’t make the time. Newspaper ‘A-board’ style sleeves are designed to “spread the news” about the taste and health benefits packed inside the pots. 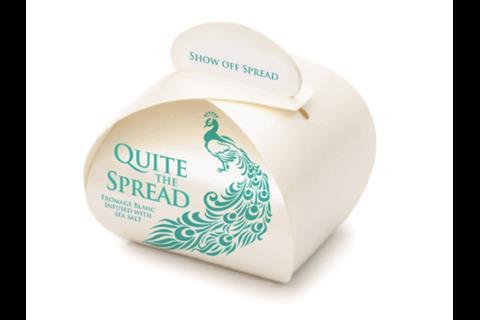 Springetts stretched the idea of what a spread could be, and how premium it could look, with Quite A Spread and Quite The Spread. Both are made with a base of fromage blanc cheese, and flavoured with ingredients such as sea salt and Seville orange and whisky. One is packaged in a transparent domed dish, while the other features packaging that opens in a manner reminiscent of a flower or peacock’s tail. 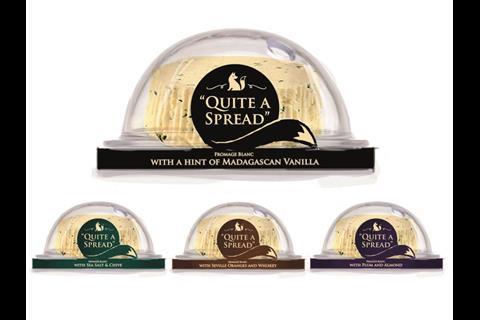 “This is all about making the spread the centrepiece, and fromage blanc evokes more indulgence but also in a naturally healthy way,” says Springetts. 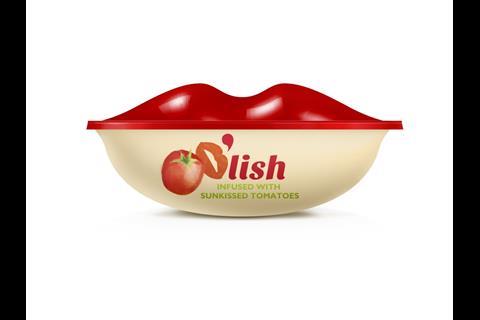 ‘Kissed with goodness’, is the concept behind the B’lish range, which is designed to dispel the idea that spreads can be tasteless and brand. The lip-styled packaging theme is carried through into flavour descriptions such as ‘sun-kissed tomatoes’. 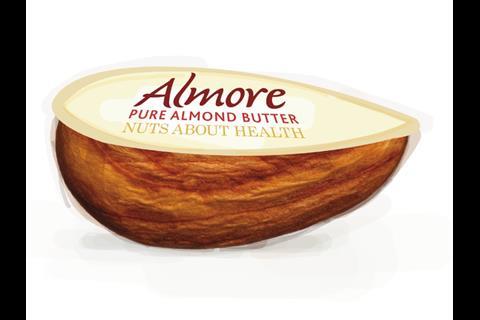 Almore is an almond butter packaged in a plastic pot designed to look like an almond nut shell. The shelf-ready packaging extends the natural feel and is designed to emulate a wicker tray. “Offering the numerous health benefits of nuts,” says Springetts, “Almore is also a tasty addition to bread or crackers”. Perfect for consumers who are nuts about health.

Butter has been stealing a march on spreads and margarine of late but The Grocer is convinced new life can be breathed into the category. We teamed up with leading design agency Springetts to explore…

The spreads fixture is not the sexiest in store. Rows of similar-shaped pots, many with similar branding, containing what are often perceived as similar products. Among the few elements breaking the monotony are functional claims that, while worthy, are unlikely to get pulses racing (though, to be fair, a racing pulse is probably the last thing someone purchasing cholesterol-reducing spread would want).

Little wonder, then, that spreadable butter is stealing share from spread and margarine. Sales of spreads that make specific health claims are down 10.5% year on year, margarine down 8% and sunflower spreads down 10.7% [Kantar Worldpanel 52 w/e 30 March 2014]. Meanwhile, sales of spreadable butter are up 9% year on year partly due to increased promotional activity, but also a result of consumer demand for ‘natural,’ less processed products – even if they contain more fat than spreads.

“We thought this category was in need of reinvigoration. Now we’re even more convinced more life can be breathed into it”

We asked brand design consultancy Springetts – the brains behind concepts such as eggs for Soldiers – to take spreads back to the drawing board. Our brief called for product ideas that would recapture the enthusiasm of British shoppers and involve different degrees of commercial and operational change on the part of suppliers and retailers, from minor tweaks that would require relatively little investment to something involving a more radical overhaul.

Springetts initially set out key criteria the next generation of spreads should look to meet.

And the agency was determined to show spread did not have to emulate butter, and could potentially be taken in very new directions.

“A spread is only a spread if we limit its definition,” adds Williams. “We wondered if you could redefine the category by giving spreads the confidence to have their own voice and not be defined by a relationship to butter… forever condemning spreads to butter’s poor cousin.”

Springetts also looked at food and lifestyle trends spread could potentially tap. These included interest in seeds and ancient grains such as flak, which could be used to introduce flavour and healthier positioning without relying on the typical lower-cholesterol or probiotic claims made by products.

It’s an area dairy Crest explored with the launch of Clover Seedburst about 18 months ago. However, the spread, which contained a blend of seven seeds and whole grains, failed to gain traction in the UK despite the success of similar products in other countries, and was axed in July. Dairy Crest says its functional Clover Additions range with added vitamins and calcium is performing more strongly.

Springetts came up with a range of concepts making use of nuts and seeds. Two of these – Sow the Seed yoghurt-based spread and the Spread A Little range –are presented on these pages. A third, Almore almond butter, which is packaged in a plastic pot designed to look like an almond nut shell, can be seen with a number of other Springetts spreads concepts at thegrocer.co.uk/dairymen.

While Sow the Seed and Almore are not traditional spreads, Spread A Little is, and has been designed to tap the demand for functionality that Dairy Crest says Clover Additions are succeeding in doing. With its colourful packaging and on-trend natural ingredients, Spread A Little aims to bring some emotional engagement to the category by targeting specific needs. Spread A Little Joy contains goji berries designed to give the user a morning boost, while Spread A Little Calm offers chamomile oil to help a consumer wind down after a stressful day.

Similarly, blending traditional spreads with flavoured inclusions is the thinking behind another design – the Blish range of spreads in lip-shaped packs and flavours such as ‘sunkissed’ tomatoes and ‘sunkissed’ peppers.

Also offering functionality, while tapping a specific consumer demand, is Village Green, a range of spreads blended with greens such as kale and spinach. The products are targeted at consumers who know they should eat greens every day but find it hard to fit them into their routine. Presented in tubs with A-board style cardboard sleeves, the products – which can be viewed online – carry messages such as ‘Spinach: good for your heart’ and ‘Broccoli: good for your bones.’

Functionality is also offered in the shape of Spread With a Twist, which is designed to tap consumer interest in products containing oats. The product is a blend of traditional spread and oats, and boasts that it can help a consumer feel fuller for longer. It offers shopers portion control, and is packaged in a tube format that is twisted to deliver a sized portion of spread.

“No longer do you need to dip your knife into the spread tub and risk scraping the crumbs into the tub,” says Williams. “This innovation twists and slices the perfect amount to be used on your toast or cracker – just enough to keep you going throughout the day.”

Twist-tube packaging has obvious cost implications, and a far more frugal packaging overhaul was offered by the concept of Oh! What A Lovely Spread. Inspired by saucy seaside postcards, this lighthearted design could show that spreads don’t always have to be serious and worthy, and might even give Brits something to smile about at the breakfast table. Using actual postcards that could be removed from the packaging, the concept could offer collectability, suggests Springetts.

While Carry On humour might work for the breakfast table, there is also an opportunity for spreads to find a place on the dinner table through luxury products, believes Springetts.

The agency developed the premium concept Quite A Spread featuring spreads made with a base of fromage blanc cheese, and flavoured with ingredients such as sea salt & chive and Seville orange and whisky. “Quite A Spread is all about making the spread the centrepiece, and fromage blanc evokes more indulgence but also in a naturally healthy way,” says Williams.

Two formats have been developed, one reminiscent of a clear butter dish and the other a stylish paper design that opens in a way designed to be reminiscent of a peacock’s tail. Both concepts, which can be viewed online, push the boundaries of how a spread can be perceived and used.

And if Quite A Spread was pushing boundaries, then Sprod smashes through them. Inspired by the bubble tea concept, Sprod are packs of individual tapioca balls containing flavoured vegetable oils. Sprod is designed to be a very flexible concept, suitable for use on toast, in cooking or as a garnish. Taking the concept and running with it, Springetts even developed a marketing slogan: ‘Why spread when you can sprod?’

“We thought Sprod could create a whole new world for spreads,” says Williams. “With a new vernacular that takes it away from the traditional spread-on-bread mentality, we think consumers and cooks will re-evaluate how it can be used, such as chucking in a pan, or garnish on a steak.”

Williams adds that he would be keen for some of his agency’s concepts to be explored further – but admits Sprod is less likely than some to hit supermarket shelves.

“Most likely to make it to market would be Spread A Little and Spread With A Twist,” he predicts. “Both push spreads into a new territory where not only is the role to add moisture but they can become wholesome and be an added benefit to your diet.”

“We embarked on this project because we thought this category was in need of reinvigoration. As we’ve created these ideas, we’re even more convinced more life can be breathed into spreads.