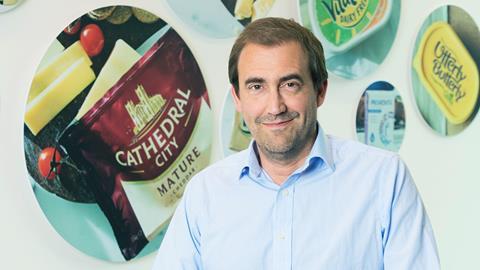 Tom Atherton has big shoes to fill after succeeding Mark Allen as boss of the newly rebranded Saputo Dairy UK. So what are his plans for the business?

It’s been a big year for Dairy Crest and its new boss Tom Atherton. Almost 40 years after it was established, the processor marked the end of an era in February as its sale to Canadian dairy giant Saputo was announced in a near £1bn deal.

Despite initially insisting he was going nowhere, joking “I obviously look older than I feel”, the departure of long-standing CEO Mark Allen was confirmed in May, with former chief finance officer and deputy CEO Atherton stepping up to take the helm from his friend and “great mentor”.

Speaking on the day of Allen’s leaving party in July, Atherton stresses it’s very much business as usual. And in many ways, the Yorkshireman, who joined Dairy Crest in 2005, is right. While the business moved into new offices in June on the site of Surrey’s famous old Brooklands racetrack, Dairy Crest (renamed Saputo Dairy UK at the start of July) has retained the same staff, Allen’s management team, and even his office meeting table and furniture. Plus, it will still focus heavily on the UK performance of key brands such as Cathedral City, Clover, Country Life and Davidstow, Atherton says.

But he is also keen to put his own stamp on the company. The father of two, who describes himself as a team player “without a particularly big ego”, has always been “inquisitive and passionate about business”. He graduated from Birmingham University in 2001 with a degree in money, banking and finance, and became a chartered accountant in 1995.

Atherton later worked in finance for Thorn EMI during the last days of its Radio Rentals subsidiary, and for Guy Hands’ private equity firm Principal Finance Group. But by 2005 he was ready for a new challenge, and private equity’s loss was dairy’s gain. “The combination of fmcg, the political angle and the farming base, in addition to the manufacturing, innovation and global commodity elements, are just fascinating. It’s got everything,” he says.

Now, as he settles into running what is now a division of the world’s eighth largest dairy company, Atherton has bold plans for the business.

It will mean even more brand innovation, an acceleration of an £85m investment in processing capacity announced last year and, crucially for such a hitherto UK-focused processor, a new drive to develop export markets.

All of which, he claims, will be easier under the new ownership. “The benefit of having Saputo on board is the expertise they’ve had of running the kind of capital projects we are planning,” he says. “They’re a business that values longevity and knowledge. They do the things they are good at. But fundamentally, their knowledge is in making good quality cheese.”

Given the well-documented difficulties now facing the liquid milk sector, the decision by Dairy Crest to sell its dairies business to Müller in 2015 now looks like something of a masterstroke.

“Selling was a brave decision, but absolutely the right thing to do,” Atherton points out. “To deliver sustainable growth, you need to be adding value.”

And Dairy Crest did just that. The smaller, more brand-focused business posted a 10% increase in revenues to £456.8m last year, while adjusted profit before tax grew 3% to £62.3m.

Three years after the sale was completed, a conversation with Saputo began at the turn of the year over a possible acquisition. “Not only did they recognise the value of our brands and our business, but they also saw a good cultural fit,” he says.

“Selling was a brave decision, but absolutely the right thing to do”

The sale, and Saputo’s “strong” valuation of the business, was described as a “pleasant surprise” for investors by City commentators, and also offered “enhanced opportunities” for Dairy Crest’s staff.

“Next week I’m off to Canada, where there’ll be a bunch of meetings around talent and how we can cross-fertilise people and ideas,” Atherton says. “Saputo is a business that’s strong on giving people opportunities, so our people have been excited.”

Citing the recent launch of the low-calorie Cathedral City 82 variant, Atherton sees the UK business growing through further innovation within its flagship brands under Saputo’s ownership. “We always have a strong pipeline, and we can definitely take Cathedral City into many more different areas. We’ve already gone into products such as spreadable, baked bite biscuits and snack bars, but there are still other areas we can target in the cheese category,” he insists.

Launching a completely new brand is less attractive, Atherton adds. Although with Saputo being such an acquisitive company – having snapped up over 30 other businesses since the mid 1990s – he refuses to rule out moving for other suppliers in its quest to grow. “If we find opportunities in the UK and Europe and Saputo is supportive, history would say they would be interested.”

A more immediate opportunity under the new Canadian ownership, though, is exports. “We’re already in conversations about taking Cathedral City into Canada and the US. It has a unique taste profile. Saputo’s ability to help us open some of those channels is really exciting,” Atherton says.

Davidstow, with its royal warrant and Cornish provenance, could also play well in these markets. “But we can also see growth in places like Germany, where you’re seeing cheddar volumes growing by 20% a year,” he adds.

Even Brexit is less daunting under the wing of the Canadian parent company, which is used “to shifting trade relationships, and takes a long-term view” Atherton says. “Saputo looked at the Brexit situation at the time of initial discussions, but ultimately they had confidence in the quality of the business.”

Being part of a big global company doesn’t mean the UK business will lose its autonomy, though. “The proof is in the pudding, but Saputo has bought a business that was high value, growing and well managed. I think their view would be, why change that?”

So it really is business as usual for the UK dairy giant. Albeit with some exciting new prospects.

Homelife: Married to Jenny. Lives in Hove with children Alice, 14, and George, 12

Potted CV: Graduated from Birmingham University in 1991 with a degree in money, banking and finance. Became a chartered accountant in 1995. Held a number of senior finance positions at listed and private equity-backed businesses before joining Dairy Crest in 2005. Appointed to the board as group finance director in 2013, and became deputy CEO in 2018