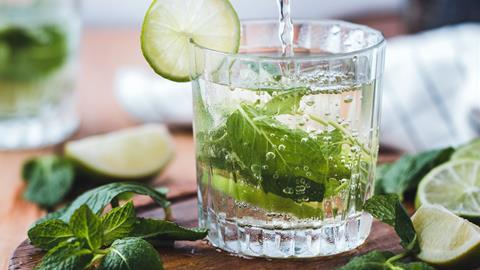 Are alcoholic drinks brands crossing a line with ‘healthier’ positioning?

Imagine it: ‘healthy booze’. No more beer bellies. A world without hangovers. One can dream.

But squint and you might begin to believe it’s possible. The past year has seen the launch of a multitude of brands that don’t make health claims, but do tout themselves as a healthier alternative.

Take the recent boom in hard seltzer launches. Low-calorie cues are virtually ubiquitous on their packs and marketing materials.

It’s happening in beer, too. For instance Michelob Ultra, AB InBev’s lower-alcohol, low-calorie brew, in March, tied up with Virgin Sport in a three-year deal. The brewer heralded “a partner who shares our values and together we can connect with kindred spirits who want to live fit and live fun”.

Amid the year’s pink gin explosion, Quintessential Brands ploughed £800k into a marketing push for its Greenall’s gin brand, centring on its zero-sugar credentials. Given sales of Greenall’s Wild Berry gin are up a stonking £10.5m – a 101.2% increase [Nielsen 52 w/e 7 September 2019] – the move appears to have struck the right chord.

This isn’t exactly new. Let’s not forget that a reputation for fewer calories was one of the biggest contributors to the prosecco boom of the 2000s.

The rise of the gin & tonic may have launched a full-frontal assault on sparkling wine’s market share more recently, but suppliers and retailers are to an extent still relying on its image as the ‘healthier’ alternative to wine to shift prosecco.

Aldi, for instance, launched an own-label prosecco earlier this year it claimed had some 120 calories fewer per bottle than a standard one, with roughly half the sugar. It even went so far as to whack a giant 63 kcal per 100ml’ sticker on the bottle’s neck.

And what’s not to like? Sure, it’s probably not a great idea to load up on hard seltzer before committing to a 10k run on the treadmill. But is it really a big deal that brands are appealing to Brits’ growing health consciousness?

“No one is saying booze is ever going to be good for you,” says Sally Wynter, founder of CBD-infused gin startup Muhu. Rather, that it “doesn’t need to be as unhealthy as it’s been”.

“There doesn’t need to be loads of crap or colours or sugar in there that doesn’t need to be there,” Wynter says. ”A lot of people who aren’t necessarily giving up booze entirely are still looking at their health and would like to see products that they can indulge in that are less bad for you.”

But brands do need to be mindful. As the past few weeks have shown, falling foul of the Portman Group – or indeed the ASA – is no laughing matter, and can be extremely costly.

Not everyone is being as careful as they could be, says drinks strategy and marketing consultant Neil Anderson. “Some brands are flying close to the wind, if not crossing a line – we are seeing a lot of claims.”

Anderson believes it’s positive that the industry is seeking to reduce drinks’ alcohol and sugar content, and boost transparency around ingredients and nutritional content. “But I have a concern that people are trying to jump on the bandwagon as opposed to bringing in genuine products that do something beneficial for the consumer,” he adds.

There are “a lot of ‘lighter’ products out there that are stripping quality out”, he says. The trend for lower-abv drinks, for instance, has led to some suppliers upping the sugar content to make up for the lost taste. “When you take something down [in alcohol] it’s easy to lose fullness of flavour.”

Taste, he argues, should always be the first priority. “Taste is so important. Forget that at your peril.”

Ultimately there are no signs the moderation trend is going anywhere fast. And with more and more Brits – particularly those highly coveted ‘gen Z’ shoppers – looking to cut down their booze intake, the commercial impetus to create these kinds of products looks set only to grow over coming years.

If brands are serious about their responsibilities, they will need to tread ever more carefully.

Daniel WoolfsonDaniel is The Grocer’s food and drink editor and is responsible for our product coverage across all categories.

Daniel has written about food and drink for the majority of his career: prior to joining The Grocer in 2017, Daniel covered food and drink news on pub industry title The Morning Advertiser, and wrote features for VICE magazine.