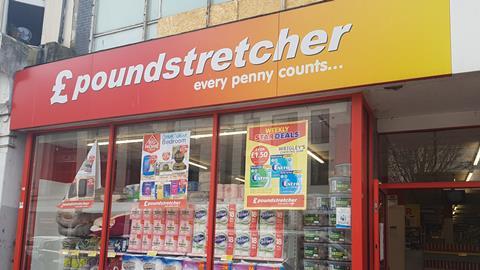 Thousands of Poundstretcher staff currently have little idea how much longer they’ll have jobs for.

Under the terms of a company voluntary arrangement agreed by creditors last week, the fate of 253 stores is dependent on their performance and landlord co-operation in the coming weeks. Several have already closed.

Yet it is not much more than a year since Poundstretcher was on an expansion drive, and talking of aligning itself more closely with the likes of B&M, having adopted the name ‘Bargain Buys’.

So, what has gone wrong?

Part of the story is told in the latest full-year accounts, in numbers that suggest the woes may not be in spite of estate growth but at least partly because of it. The variety discount chain grew the estate by 56 stores to 450 in the year ended 31 March 2019. At the same time, turnover rose 12.2% to £434.6m while profits slumped from £2m to a £227,000 pre-tax loss.

“I think Poundstretcher expanded too quickly,” says GlobalData retail analyst Amy Higginbotham. “The rise in turnover will likely have been driven by new store openings, rather than increasing like-for-like sales, indicating that its offer does not resonate with shoppers.”

That failure to resonate could be because of what Poundstretcher insiders consistently highlight as “gaps in the range”.

“If you compare a store to a competitors’ you can see the gaps that are affecting sales,” says a source.

While the likes of Poundland, Home Bargains and B&M have been steadily expanding their food ranges, Poundstretcher’s shelves have at times lacked some basic everyday essentials.

“Sometimes we’ve had no bread,” says another source. “Or we’ve been months without toilet paper. It’s the basics.”

Instead of ensuring shelves are stocked with the essentials customers purchase the most, buying decisions have been driven by margins and opportunities to snap up clearance stock, a source claims.

In contrast, Poundland is “much better at latching on to new trends and introducing new ranges”, while B&M “continues to improve visual merchandising and increase focus on trend-led products”, suggests Higginbotham.

Range was highlighted as an issue by Chris Edwards in the 2018 reality TV programme Saving Poundstretcher, focusing on his stint as CEO. He only had six months to try to change it before he was out. Neither have the top Poundstretcher executives who followed had long to make their mark.

The high churn rate gave none of them enough time to implement change. “You need five years to put a growth strategy together and run the organisation based on your vision,” says a source.

One of Kerpicci’s goals was to improve staff training, as well company culture. “She tried to introduce training days for area managers and store managers,” says a source. “She tried to change the culture to make it less blame-focused.”

Meanwhile, one of Saha’s targets was to revive the estate – it was during his time at the company that some stores were given a makeover with the new name ‘Bargain Buys’. Ten months after his departure, “tired stores” are highlighted by sources as another problem for the retailer.

“There are corner shops that look better than some of our stores,” says a source.

There may, too, be corner shops that are better located. While the pandemic and subsequent decline in footfall has clearly brought Poundstretcher’s problems to a head, its typical locations have also left it more vulnerable than some rivals. “If you look in a shopping centre or retail park, we tend to be in a back corner,” says a source. “They lack prime locations.

“We can’t compete with Poundland. In every single town, they are in a much better position for footfall.”

It’s another of the reasons why Poundstretcher’s fortunes have differed so markedly from some rivals during lockdown. “The coronavirus outbreak has pushed Poundstretcher over the edge, as reduced town centre footfall and absence of a transactional website made it hard for the retailer to compete,” says Higginbotham.

“Competitor B&M, meanwhile, seems to have flourished, reporting a 22.7% uplift in like-for-like sales in the UK across the eight weeks to 23 May.”