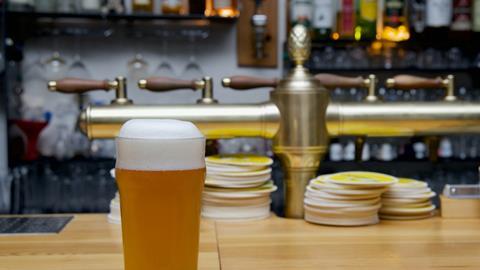 You can practically hear Wetherspoon boss Tim Martin choking on his Full English upon learning that Asda has, to all intents and purposes, opened a pub in one of its stores.

Well, sort of. In a month that has seen Wetherspoon begin practically giving away booze, Asda has cheekily launched a pub-themed beer dispensary station in its Milton Keynes store.

Asda’s in-store ‘pub’ – the result of a partnership with beer specialists Craft on Draft – will offer 12 freshly poured draught drinks that can be taken away in one or two-litre refillable glass containers or cans, with the supermarket touting it as a step towards greater sustainability, which will also enable it to stock more local beers.

But rest assured, this is no pub-killer. You can rest easy, Tim. It is an interesting play – and symbolic of a wider trend in beer category management.

It’s plain to see why Asda has launched this station – and why it thinks it could be on to a winner. Primarily, it could help inject some excitement and differentiation back into the craft beer category.

For a long time, craft was king. Smaller brands were stealing facings from the big boys like they were going out of fashion. Big suppliers in turn were hoovering up exciting small players and reaping the benefits of their economies of scale and distribution heft. Tesco was revamping its range every three months with a fresh influx of weird and wonderful cans.

But it’s been some time since the craft beer category offered anything genuinely exciting in retail. Much of the space that used to be dedicated to a legion of out-there brands has simply been given to multipacks from the likes of BrewDog, Beavertown and Camden Town Brewery. Which makes complete sense in the context of the return of the big weekly shop.

The problem with this is that while relying on multipacks and key suppliers is economical, it doesn’t exactly make for exciting shelves or a visually appealing feature. And the same market factors have been a boon to the lager behemoths, which have reaped the benefits of shoppers flocking to well-known, recognisable brands for safety and certainty over the past 18 months.

But with so much volume coming from commodity multipacks in craft, there’s a gap in the market for the beer category to offer something truly premium and engaging again.

There’s a caveat. The sheer proliferation of craft cans now available has made it hard for smaller brands to stand out, even when they are given space in the mults. There’s a reason why all but a handful of brands have actually made a serious dent in the wider category. Even the feted Cloudwater, one of the UK’s most acclaimed and respected craft brewers, has only accrued £1.5m in sales since entering Tesco in April.

That’s respectable, but hardly game-changing. It’s the kind of growth that indicates a dedicated following but limited mainstream appeal. The kind of performance that suggests canned craft’s time in the spotlight is over. Supermarkets need to look elsewhere if they’re going to keep shoppers trading up in beer.

Enter Asda’s in-store pubs. Selling beers from local brewers offers a nice point of differentiation, with a product at a genuine premium (Asda will charge between £5.90 to £8.20 for a litre). And it offers a fun experiential element. Outsourcing the sourcing to a specialist that can do the local legwork is smart, too. But whether it will prove scalable is up for debate.

It’s questionable how many shoppers are really going to pay so much extra for local beers when the price per litre is so much higher than buying cans, which will be sat just metres away. The station also looks like it takes up a lot of space in store, which could be used in other ways if it doesn’t start shifting volumes.

Asda will also have to think carefully about the USP of the beers it stocks. Locality is one thing, but that factor alone may not be enough to lure shoppers away from staples.

In any case, it shows Asda is keen to work out where the category is heading next. And that should be applauded.