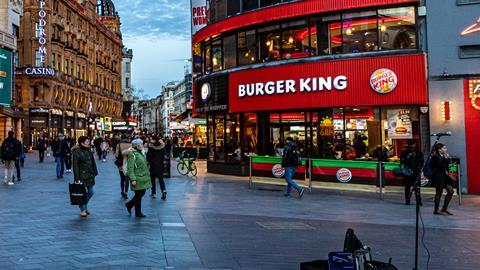 Five Guys is the UK’s most popular takeaway. At least, that’s according to review site Psydro, which has tallied all its users’ scores from 2020. It’s little wonder the US fast food chain topped the list (narrowly beating Wagamama, Nando’s and Greggs). After all, its customisable burgers and milkshakes are fan-flipping-tastic. So, well done, Five Guys!

Greater plaudits, however, must be directed towards Burger King. Not for coming eighth in Psydro’s rundown, but for its new series of sustainability commitments across the likes of animal welfare, sourcing and supply chain, palm oil, diversity and inclusivity, and supporting communities.

Called ‘Burger King for Good’, it’s a whopper of a list. BK says it’s inspired by “the core principles of the company: the belief that as well as being tasty, affordable and accessible, Burger King food should be good for the planet, for those involved in producing and making it, those who serve it and for guests and communities as a whole”.

However, the fast food operator does have some eye-catching fresh news too. Its UK operation intends to remove all single-use plastic by 2025 – by which time it will use 30% recycled plastic in its packaging and offer 100% recycled or certified packaging.

That’s a step forward for BK UK, which has already axed plastic straws (in favour of paper) and plastic toys in its kids’ meals. It’ll now turn its attention to the likes of cup lids and condiment sachets.

It’s interesting to see a fast food giant confident it can cut down on both food waste and single-use plastic, given that people often use concerns about the former issue as an excuse for not cutting back on the latter.

That’s why the two issues are a challenge for supermarkets. They’re making great strides – particularly in plastic reduction – but they still have a long way to walk.

Of course, Burger King has it easier because its goods are consumed immediately, unlike supermarket food, which needs to last longer in shoppers’ fridges. Nevertheless, the company’s sustainability commitments are a big step forward. Next on the list: how to top a Five Guys bacon cheeseburger.