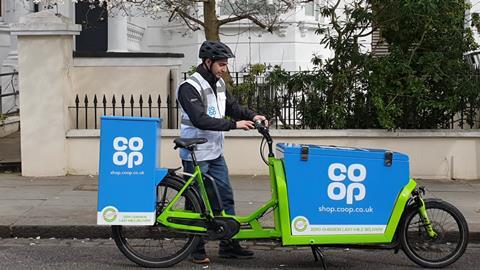 Last week the Co-op announced it was stopping the sale of plastic bags for life. As a significant move in the war against plastic, it is perhaps surprising that the retailer did not wrap it up as part of its major climate commitment, unveiled today.

It was right to split the two. Plastic bags are box office and tend to take up a lot of column inches when retailers make any kind of green move. It is great that Co-op is tackling the issue. The Grocer has supported the removal of single-use plastic bags from stores for a long time and there is certainly a danger that their replacement in most cases – the plastic bag for life – is initially seen as sturdier but ultimately gets thrown away too.

But headline-grabbing commitments on bags tend to distract from the bigger question: what are the major grocery retailers doing to fundamentally address the climate crisis? Today’s announcement looks to go some way towards addressing this.

The society has come up with a 10-point climate plan that seems aimed at delivering real change.

We hear a lot about retailers aspiring to reach net zero in terms of carbon emissions and this is the key focus of the Co-op’s plan. It is aiming to reach that mark by 2040, 10 years ahead of the target set out by the government for the UK as a whole.

There are some notable commitments. Co-op will make all its own-label food and drink carbon neutral within four years. It will do this by working with suppliers to deliver more sustainable approaches to elements such as feed, growing techniques and packaging.

Another key move, and indeed one that appears to be striking a chord already, is price-matching its Gro vegan range to the meat or dairy alternative – in some cases reducing the price of the plant-based lines by more than 50%. Its Gro vegan sausages will now cost £1.45, rather than £3, for example.

Food CEO Jo Whitfield says “the Co-op would never look to tell shoppers what they can and cannot eat”. Instead, the move looks to eliminate the barriers to making more sustainable choices. This is spot on. In the first case, those who choose a plant-based diet should not be unfairly hit in the pocket for doing so. Meanwhile, those thinking of cutting down their meat and dairy consumption will be much more likely to do so now it won’t cost them twice as much.

Driving behaviour change in customers is likely to be one of the biggest things a retailer can do and this feels like a no-brainer.

It will also allow suppliers access to its Co-op Power energy buying arm, in a bid to help them “source low-cost energy in an ethical, sustainable way”.

Whitfield has also linked her pay to the retailer meeting these targets – a nice touch, though she has been responsible for the Co-op’s climate goals for many years already and doesn’t expect this financial incentive to have a material impact.

What will, however, is reporting. Co-op has been reporting on its environmental impact for 15 years already and has promised even greater transparency. It is calling on other retailers to follow suit and even for the government to step in and make it mandatory for businesses to report their end-to-end greenhouse gas emissions. This is certainly something all grocery businesses should be doing voluntarily and should be the first commitment on any climate plan – if you are really serious about change, then you need to show it.