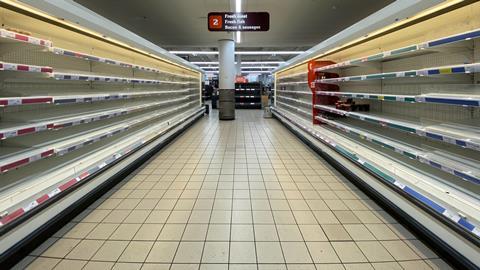 Coronavirus crisis must lead to fundamental reforms for food supply

Downing Street has failed for years to prepare for a food crisis like the one in which we find ourselves.

The threat of a no-deal Brexit should have provided all the necessary warning signs to ensure that as a country, our food security could not be threatened by an event like the coronavirus outbreak. Both industry and Whitehall have reiterated the risks on numerous occasions.

Most dramatically, ‘Operation Yellowhammer’ revealed last year that the government expected shortages of some fresh goods alongside potential prices rises that could hit “vulnerable groups” in the case of a no-deal.

Meanwhile in June 2018, a doomsday Brexit scenario drawn up for David Davis warned there could be food shortages within a fortnight if trade into Dover was disrupted.

And yet a month later, sitting in front of a House of Commons select committee, Dominic Raab, then Brexit secretary, suggested it would be left to industry to figure out how to feed the country in such a situation.

Now as the effects of Covid-19 bite, many in the industry are justifiably frustrated.

Brexit planning could, and should, have been comprehensive crisis planning for the coronavirus outbreak. Crisis management systems should have been put in place so industry wasn’t left waiting for government to respond.

But as Tim Lang highlights in his new book, Feeding Britain, there really are no comprehensive plans for ensuring the UK remains fed in a crisis. Although food is listed as one of the 13 key sectors in the Civil Contingencies Act, the guidance on its protection in an emergency stretches to less than a page.

This must change. Just-in-time supply chains are inherently vulnerable. We’ve now had two ‘once in a generation’ threats to the food industry in the space of six months (no-deal and Covid) and with Brexit negotiations still to be settled, climate change and ongoing trade wars, there appears no reason to rule out further disruption.

It is time for the government to step in and pull its weight in improving the resilience of the British food system.

Much like the financial crash of 2008 led to fundamental reform in the Bank of England’s role in protecting the banking sector, Covid-19 must do the same for food.

This should first and foremost begin with the introduction of comprehensive, independent stress-testing on the British food system as a whole, not solely for individual retailers or product lines, as is currently the case.

Retailers stress-testing and contingency planning for their own supply chains is no longer sufficient. Circumstances sometimes necessitate competitors working together to survive the challenge, and therefore planning for crises must do the same.

Only the government (or its regulatory bodies) can do this and enforce the required changes if supply chains cannot meet the challenge in the safe confines of a computer model.

We made the decision following 2008 that the financial sector was too important for its risks not to be overseen by government. Why should food be any different?