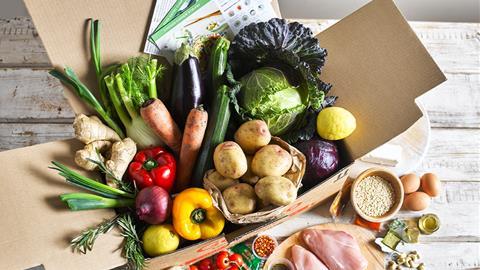 In environmental news this week, the UK’s attention is rightly focused on Sweden’s Greta Thunberg. The impressive 16-year-old said it all yesterday in her address to MPs about the ecological disaster threatening our planet.

“Around the year 2030 – 10 years, 252 days and 10 hours away from now – we will be in a position where we set off an irreversible chain reaction beyond human control, that will most likely lead to the end of our civilisation as we know it,” the Nobel Peace Prize nominee warned.

“That is unless in that time, permanent and unprecedented changes in all aspects of society have taken place, including a reduction of CO2 emissions by at least 50%.”

One such change might be the switch by consumers to recipe boxes from popping to the supermarket. That’s according to a new study by the University of Michigan. Meals from the likes of HelloFresh and Gousto have pointedly smaller carbon footprints than those of the equivalent meals bought from a grocer and prepared at home, the US boffins found. And that’s in spite of the overabundance of packaging those direct-to-your-door services often use.

But, like I said, the environment belongs this week to Thunberg. So, we turn to another issue of sustainability: food waste – what with today being Stop Food Waste Day.

Those same recipe box brands have an important part to play in slowing the developed world’s addiction to wasting food, says Brent Heard, lead author of the University of Michigan study. “When you zoom out and look at the whole lifecycle, packaging is a relatively small contributor to the overall environmental impacts of a meal. What really ends up mattering is the quantity of food wasted throughout the supply chain,” he told NPR.

By virtue of being pre-portioned, fresh ingredients that will very often be eaten on the day of purchase, brands from Blue Apron to Mindful Chef are helping to limit the amount of grub we throw away.

And, wow, do we throw it away. To coincide with Stop Food Waste Day, Gousto has estimated that Brits bin a gobsmacking £494m worth of food each week – and that 40% of an average family’s weekly grocery shop is chucked out.

Those figures follow last month’s survey by Bidfood.. The foodservice provider found millennials were the main culprits for “shocking” levels of household food waste – with 44% of admitting to disposing of food from their kitchen once a month, and 28% saying fruit & veg were the most commonly wasted products.

Poor judgement of portion sizes, inexpert meal planning, confusion over ‘use by’ and ‘best before’ dates, and simple forgetfulness are just some of the myriad reasons for shoppers’ wasteful behaviour (as followers of The Grocer’s highly successful Waste Not Want Not campaign may well already be aware).

Here, then, is the chance in the war on food waste for D2C recipe providers to make a positive contribution, as well as a few extra quid. They frequently big up their benefits when it comes to health, convenience, quality and taste – all major concerns of British consumers – but they also have a shining opportunity to attract new, sustainably minded customers. Such efforts would surely not go to waste.