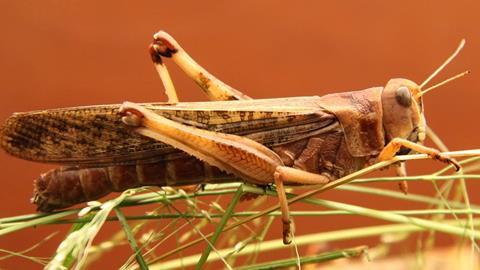 Eating insects is healthy. Can a Welsh duo make it cool?

Hungry? How about a hearty bowl of cockroach stew? Or centipedes and mash? Maybe just an earwig sandwich?

Still hungry? It’d be no surprise if you’ve lost your appetite.

But be aware: what sounds like dishes from the menu of some hellish eatery, the Creepy-Crawly Café perhaps, could be the dinnertime staples of the near future. As an expanding population demands more protein, edible insects have been tipped as the food of the future.

So all hail the launch of Vexo, a food protein developed by Bug Farm Foods at its new R&D facility in St David’s, Wales.

Funded by the Welsh government and Innovate UK under the Small Business Research Initiative, Bug Farm’s toothsome aim is “to find a way to harness the nutrients contained in insects and deliver them in a form that is acceptable to our western palates”.

The couple’s latest innovation, Vexo, is arguably a more mouth-watering prospect for those who can’t bear the idea of eating bugs, insomuch as it “can be used in a similar way to minced meat”.

“Insects are exceptionally nutrient-dense and environmentally sustainable to produce,” says Beynon. “Many insects contain weight-for-weight a similar amount of protein to beef and they can contain all nine essential amino acids. Insects can be farmed in high-welfare farms while requiring very little feed, water and space and emitting hardly any greenhouse gases.”

It’s a persuasive point, and one that has been made many times before. Yet grocers have for years largely ignored it, with little more than a handful of brands winning shelf space. Only Eat Grub is currently making any sort of noise in the major mults, with an assortment of cricket-based snacks in Morrisons (its Sainsbury’s listing of late last year having been short-lived).

So perhaps the edible insect revolution will be led not by fmcg brands but by bright sparks such as Beynon, Holcroft and the people of London’s Entocycle, the UK’s first insect production facility.

Theirs are the hi-tech solutions that can hopefully be used in a variety of everyday foodstuffs that taste like the real thing and satisfy our meat lust without turning our stomachs or contributing to further damage of the planet.

And there’s more. Not only is Wales’ Vexo kinda hip-seeming – bringing to mind the likes of Beyond Meat and Impossible Burger from the US – its satfat content is more than 80% less than that of the minced beef it resembles. This makes it a potentially powerful weapon in the war against childhood obesity. “Nearly one-third of two to 15-year-olds are overweight or obese, with obesity costing the NHS in Wales around £73m” according to the government.

Which is where verisimilitude will be essential – or else good luck trying to get kids to eat beetle burgers.