Give us our daily bread, but naturally please Pret 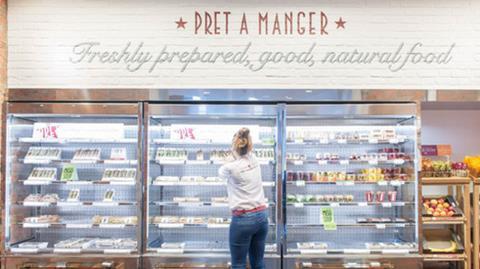 It’s nearly Christmas, and the season of goodwill is upon us. Well, almost.

Apparently the Real Bread Campaign (part of the charity Sustain) isn’t feeling particularly festive, having chosen this week to launch an attack on Pret A Manger for using a “cocktail” of artificial additives in its sandwiches, despite claiming to “shun obscure chemicals”.

According to the campaign, the artificial additives used by Pret across its baked range include E920 (l-cysteine hydrochloride), E472e (diacetyl tartaric acid esters of mono and diglycerides), E471 (mono- and diglycerides of fatty acids), E422 (glycerol), E330 (citric acid) and E300 (ascorbic acid).

And to make things worse, Pret’s “fresh” sandwiches don’t carry ingredients labels to warn consumers of the unpronounceable additives lurking alongside the turkey and cranberry in their Christmas sarnie. Or, indeed, in any of their sandwiches.

Apparently the Real Bread Campaign has been in correspondence with Pret’s CEO Clive Schlee for 18 months on the issue, but to no avail. So it has made a very public call for the foodservice chain to either remove the additives – ideally by choosing a Real Bread bakery - or remove all the ‘natural’ claims from its marketing and publish full lists of ingredients, including additives, at point of sale.

Pret hasn’t denied the claims, with Schlee admitting that while the chain’s bloomer bread, brioche, flatbreads and stone-baked baguettes are “made without any artificial additives at all”, its sliced sandwich bread contains “small amounts of widely used emulsifiers” to stop it from falling apart easily.

One could argue that the chain deserves this nightmare before Christmas. After all, it is a bit disingenuous for a company that prides itself on creating “handmade natural food avoiding all the obscure extras common to so much of the ‘prepared’ and ‘fast’ food on the market today” to quietly stuff its loaves with additives.

But while its sliced sandwich bread might not constitute what most would consider “natural”, I would imagine Pret’s claims would stand up for most of its other products.

And far from ignoring the Real Bread Campaign’s call for a change, the chain has been developing a loaf that is without additives except ascorbic acid, and which Schlee says is set to be tested in the kitchens early next year.

It can’t switch to a Real Bread bakery for its loaves, Schlee has said, because “their prices were two to three times our current price and moving would cost Pret several million pounds”.

So, it’s a tricky one. The Real Bread Campaign has a point, but so does Pret. At the end of a day, it is a massive chain with 350 shops worldwide, and trying to stay true to natural values at that scale gets a bit, well, difficult.

Any business, be it sandwich chain or supermarket, should be very careful to make sure that what they are saying matches what they are doing. After all, a loss of consumer trust is for life, not just for Christmas.