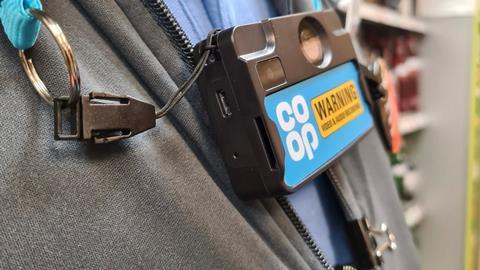 Government has left face masks row for retailers to deal with

When the coronavirus first hit UK shores, supermarket bosses had plenty to worry about.

Maintaining supplies as the world went into shutdown and transforming operations to cater for a huge surge in digital demand, for example. Or coping with potentially huge staff shortages. But I doubt many of them lost much sleep over face masks.

Which was a mistake, it turns out. Because face masks have rapidly become one of the most divisive aspects of the pandemic. And supermarkets are now bearing the brunt of public frustration, thanks to rules making them mandatory in shops.

On the one hand, retailers are facing huge criticism over social media for not challenging customers who aren’t wearing masks. Perhaps that’s because 80% of Brits believe they should be mandatory in shops, according to a recent YouGov survey.

But there are still plenty of people who don’t agree (or just don’t want to follow the rule themselves). And they are increasingly outraged when asked to mask up in shops.

The upsurge in violence and abuse against shopworkers has been so noticeable that a House of Lords report has today warned the government might have to reconsider the rule.

The Co-op said staff faced their worst week in history in terms of abuse and antisocial behaviour as the rule came into effect in England last month – with a shocking 990 incidents of antisocial behaviour and verbal abuse recorded from Monday 20 July to Sunday 26 July. It even issued frontline staff with body-cams to counter what it called the “violence epidemic”.

Part of the problem, according to the House of Lords report, is that supermarket staff themselves aren’t required to wear masks by law. It’s an understandable exemption – given that putting a mask on for an hour to do a supermarket shop is quite different from wearing one all day.

But it’s adding to the tension in stores. And while retailers can (and are) advising their staff to wear masks or visors, the lack of legislation makes it hard for them to insist on it.

Of course, if mandatory face masks prove to be an effective weapon in the fight against a second wave of coronavirus, you could argue all this would be worth it.

But you’d expect the wellbeing of key workers to be higher up the agenda for Boris Johnson, the man who released a list of reasonable excuses allowing people to drive to the countryside for a walk during the lockdown, in the name of mental health.

Perhaps – as the Co-op has suggested – introducing tougher penalties for those found guilty of harming shopworkers would help.

Instead – as has been the case with so much of recent government policy – the rule was rushed through with little or no heed of the potential dangers.

And, as ever, the industry has been left to pick up the pieces.