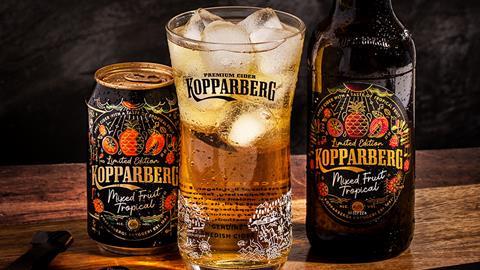 Swedish cider brand Kopparberg is undoubtedly one of Britain’s booze success stories. In the last year alone, its sales rose by £36.6m to £221.2m, as our Britain’s Biggest Alcohol Brands 2021 report reveals [NielsenIQ 52 w/e 15 May 2021].

Still, it claims unfair treatment by the taxman has left it at a disadvantage versus its domestic rivals - prompting it to file a high court claim against HMRC.

Kopparberg claims that by allowing domestic suppliers to dilute their products – and therefore pay less tax on the drinks’ final volume – the UK breached EU trade laws, to the disadavantage of importers.

It has a point.

Post-duty point dilution was banned in the UK last year (which, unsurprisingly, led to a swathe of price rises and reformulations). But since the early nineties, it had been a key driver behind the proliferation of massive booze trends such as the alcopop boom and the rise of fusion wines, which were classified as ‘made-wines’.

Had it not been so financially attractive to make these drinks, categories like alcopops and fusion wines (the whole concept of which was invented to take advantage of the loophole) would not have risen to prominence as ferociously as they did. Many fruit ciders, too, were made with the dilution method.

By the time the ban came into force the damage, from the Swedish cidermaker’s point of view, was already done. And while there were major benefits for the UK - such as encouraging product innovation and fuelling job creation and growth - it’s easy to see how it must have come across to suppliers like Kopparberg: as typical English exceptionalism.

There are certainly ramifications beyond Kopparberg’s case. According to national reports, HMRC could face a deluge of claims from foreign suppliers if the floodgates are opened.

Which could lead to a hell of a bill. There’s also little chance the taxman could force suppliers who used duty dilution to pay up. After all, “they had a legitimate expectation that it wasn’t a problem” says Powell.

Alternatively “customs could argue a defense of unjust enrichment, if [foreign suppliers] have passed on the taxes they’ve paid in prices to the customer” he adds. But the simple truth is none of these actions is entirely satisfactory.

Put simply, the situation is a massive mess that could leave the treasury facing a reckoning of its own making, over a practice which isn’t even legal anymore.

Alternatively, Kopparberg could be left with nothing but a hefty legal bill after what is likely to be a very drawn-out process. Success is, after all, never guaranteed.