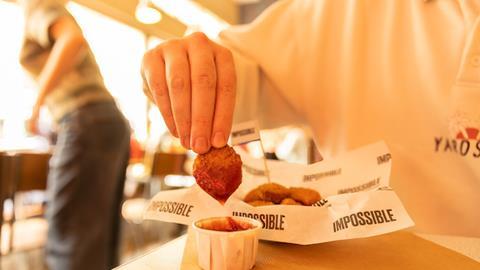 Impossible has hit the UK. But with inflation soaring, is it right product, wrong time?

If the enthusiastic punters and VIPs who thronged to Impossible Foods’ UK launch yesterday are to be believed, the US plant-based giant could have a hit on its hands with its take on the chicken nugget.

But has the brand, seen alongside its rival Beyond Meat as a pioneer of the fake meat category, already missed the boat in the UK?

The Silicon Valley darling made its long-awaited entrance to the UK market at posh kebab shop Le Bab’s Covent Garden branch, and will roll out its nuggets (made from wheat and soy protein) and a sausage patty (made from soy protein) into an initial 300 restaurants across the UK over the coming days.

Impossible’s two imported products will be available through trendy chains such as MeatLiquor and Patty&Bun, in Greene King pubs and even high street stalwart fast-food operator Chicken Cottage. It is also promising a UK retail launch later this year and even a longer-term switch to UK manufacturing.

The consensus at the launch event around the nuggets in particular was positive. And Impossible CEO Peter McGuinness’ claims pre-launch consumer testing was “unequivocal – Brits simply prefer Impossible nuggets over the animal version”.

But despite early signs the nuggets will pass the taste test for UK consumers, the elephant in the room was the absence of its signature Impossible Burger.

That, of course, is the product Impossible built its business on – a plant-based ‘fake meat’ burger that bleeds just like real meat – and contains soy leghemoglobin, or plant-based heme, which gives the product its meat-like taste and texture.

This high-tech and genetically-modified ingredient led to the delay in the launch of the Impossible burger in its homeland and restricted its availability to foodservice until its launch into US supermarkets in 2019.

And just like Impossible’s early experience with food watchdogs in the US, the business is now waiting for similar regulatory approval from both the UK’s Food Standards Agency and the EU’s European Food Safety Authority.

Impossible founder Pat Brown was relaxed when asked about the regulatory process by The Grocer this week, describing the delays as “just a bureaucracy” and a “process”.

But given the brand’s intention is to “completely replace” animal-derived food, he must be hoping Impossible’s flagship product will gain approval soon.

After all, this isn’t 2018, when Impossible and Beyond Meat captured the zeitgeist around the burgeoning plant-based category.

Without its fabled burger, the brand is pitching two products that are already well-served by a multitude of existing rivals into a fast-maturing UK meat-free market that clocked up more than £607m in sales last year [The Grocer Top Products/Nielsen 52 w/e 11 September].

And while Beyond Meat performed solidly, adding £6m to UK retail sales that climbed to £11.6m, it’s still a long way behind larger (and cheaper) rivals such as Richmond, Linda McCartney’s and Quorn, while a raft of other brands such as Meatless Farm, The Vegetarian Butcher and This have also established a strong following among shoppers.

Impossible’s challenge, therefore, will be to break into a retail market dominated by these brands without its key product and USP.

Initially, it hopes to grow the brand in foodservice, but that’s no mean feat given the cost of living crisis is threatening to seriously impact out-of-home sales, and branding opportunities are far fewer than in retail.

And while it would be suprising if the brand didn’t secure at least one supermarket listing, the story of Pilgrim’s’ seemingly successful Taste & Glory brand – which was discontinued only last month – should serve as a cautionary tale that not all plant-based brands can succeed in such a competitive environment.

Given how price sensitive UK consumers are now and will doubtless be over the coming months, success or failure could ultimately come down to the rsp.

Beyond Meat’s products are significantly more expensive than its UK rivals, and you’d imagine Impossible’s carefully crafted offerings would come at a similar premium.

Impossible was tight-lipped about the price point of its products yesterday, but it’s something that has doubtless been on the minds of its bosses as they costed the UK launch of what is a US-manufactured product imported into the UK.

Will Impossible Foods be a success in the UK? It’s too early to say, but launching in 2022 looks like it could be much more challenging than it would have been back in 2018.