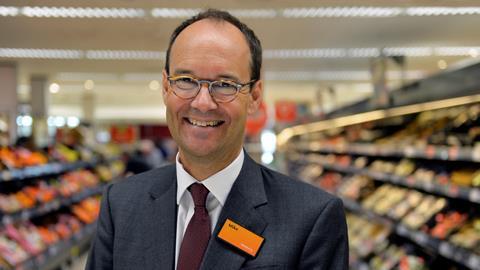 Is glut of grocery bods at NHS Test and Trace a good thing?

Mike Coupe could have had an easy life. Having left the top job at Sainsbury’s, he could have spent the rest of the year singing show tunes on a beach somewhere, returning months later with an on-brand orange tan to ease the boredom with some cushy board roles.

Instead, Coupe is heading into a role at NHS Test and Trace – about as far away from an easy life as it’s possible to get.

The government’s coronavirus contact tracing agency has been mired in controversy since its inception earlier this year. Last week, it hit the headlines again after an Excel spreadsheet reaching its maximum file size caused a technical glitch. That glitch stopped new names being automatically added to it – meaning nearly 16,000 Covid cases went unreported in England.

Now Coupe is getting involved in the shenanigans by joining NHS Test and Trace in the role of testing director, as first reported by Health Service Journal. He’s not the only leader with supermarket experience at the beleaguered agency. In fact, there’s now a glut of grocery bods on its board.

Dido Harding, interim executive chair of the agency, is probably best known as the former chief exec of the TalkTalk Group. She famously refused to resign after the company was hacked by two teens in 2015, resulting in thousands of customers having their personal details stolen. But she earlier served in director positions at Tesco and Sainsbury’s, sitting on the latter’s operational board.

The agency’s chief people officer Gareth Williams, meanwhile, is a former head of HR at Sainsbury’s.

And former Waitrose digital director Ben Stimson has also joined as chief customer officer, after a decade at the supermarket (leaving just before receiving kudos for Waitrose increasing online orders by 20% since its split with Ocado at the start of September).

So are they the right people for the job?

Labour’s shadow health minister Justin Madders MP has expressed concerns over the lack of NHS talent at the top. “The fundamental mistake the government made with test and trace was to bypass existing NHS structures and go for unproven private sector solutions,” he said.

Indeed, Coupe’s appointment sees him replace Sarah-Jane Marsh, who is returning to her hospital trust exec position, further eroding the clinical experience at the agency. As one commentator put it: “The absence of almost anyone with clinical operational insight feels a bit scary.”

But does it matter that NHS Test and Trace execs might faint at the sight of blood? Is clinical ops experience even necessary?

Arguably, the agency’s mission is more one of supply chains, logistics and technology than anything medical. Grocery has been nailing that for decades. And the sector has proven itself under extreme pressure and heightened scrutiny, managing to keep shelves mostly stocked and customers content despite all the disruption of this year.

There are other things about the supermarket-heavy leadership at NHS Test and Trace that may provoke concern. The perceived cronyism. The privatisation of many of its key elements. The fact Coupe has only committed to the role until Christmas.

But the troubled agency is probably in now in better hands than it was before. To pick another song from Coupe’s favourite musical, 42nd Street: here’s hoping there’s a Sunny Side to Every Situation.