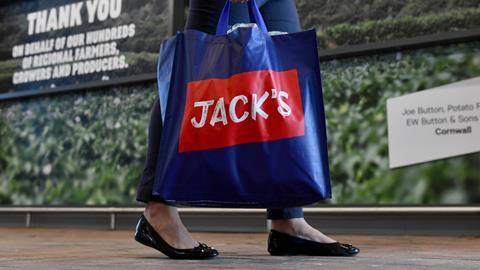 Jack’s customers want old-fashioned Tesco values, not to be part of an experiment

The Union flag bunting is coming down in Rawtenstall‎, but it’s got nothing to do with the battle over Brexit.

Instead, Tesco has admitted defeat on a failed experiment, after putting the vote to the people.

Having listened to customer feedback, the retail giant is abandoning its latest Jack’s concept in the Lancashire town, and turning the site back into a core Tesco that “customers know and love”, UK CEO Jason Tarry said.

Inevitably, this u-turn by Tesco is going to raise questions about the future of its entire Jack’s venture.

It seems a very long time ago that the world’s press descended on its debut store in Chatteris, Cambridgeshire, amid frenzied excitement that Tesco was going to launch a full onslaught against the discounters.

One year on, however, and that excitment has fizzled out. Jack’s financial results have so far underwhelmed and there are nowhere near the 100-plus stores some had predicted.

In fairness, the Rawtenstall‎ store – the ninth of 10 Jack’s launched so far – was always an experiment. The 40,000 sq ft store trialled new ‘buy more, save more’ bulk-buy offers, which had led to speculation that Jack’s could end up becoming more like a cash & carry than a traditional retailer.

The verdict from shoppers, it seems, was less than positive.

Tesco says it still intends to carry on the trial at another location, though surely it must have had its fingers burnt. It also insists it is pushing ahead with three more Jack’s stores – though not in the bulk format – in Liverpool, Wakefield and Sheffield. These will open before Christmas, it insists.

Tesco is at pains to point out that Jack’s has become a “test bed for ideas”, such as the Fresh Five produce offer recently rolled out in Tesco stores (though the Festive Five had already long become familiar in mainstream Tesco stores). But it’s an expensive way to test new ideas, which are regularly trialled in mainstream stores anyway.

Rawtenstall‎ was, ironically, perhaps the concept that would appeal most to ’pile it high and sell it cheap’ Jack Cohen, the Tesco founder the new chain was named after.

But while Tesco should be applauded for listening to its customers, the store’s abandonment also reveals the basic problem facing the newcomer: customers don’t really like being part of an experiment.

They don’t want to be a “test bed” , they want old-fashioned values such as availability, customer loyalty, good and friendly service, cheap prices and continuity… which take years and, crucially, much bigger scale than Jack’s currently has, to build.

It’s something Jack Cohen would have no doubt realised all too well. As would Tarry and Lewis, I imagine, which is why it would be no surprise to see them pull the plug completely.