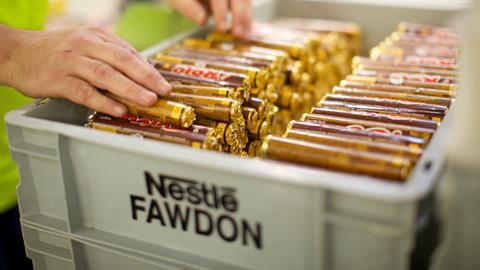 The legendary Kit Kat slogan must ring pretty hollow to Nestlé’s factory workers at the moment. Because if anyone needs to have a break, it’s them after working their way through the challenges of the pandemic. Instead comes the hammer blow of nearly 600 redundancies.

Today’s announcement of the closure of Nestlé’s 63-year-old factory in Fawdon, near Newcastle upon Tyne, will undoubtedly be seen by its staff as a kick in the teeth. Especially after the company announced a third successive year of booming profits in February, followed by its strongest quarter in a decade.

Union GMB was quick to accuse the company of “greed”, despite Nestlé’s promise to invest nearly £30m in its other plants in York and Halifax.

While the human implications rightly come first, today’s move also looks like it will have big implications for ranges too – especially given the major wave of consolidation underway in many of the supermarkets. Questions are bound to be raised about how this ties into the impact of the pandemic and Brexit, and whether this is a sign of things to come in the industry.

Nestlé says it wants to concentrate on its biggest brands, with the modernisation of its York and Halifax sites allowing it to produce 500,000 more Kit Kat products a day, for example.

Whilst sources deny any immediate plans to rationalise its range and cut other, less successful lines, the future of many of the 200 products currently produced at the doomed north east plant feels less rosy.

Fawdon has been home to the production of what Nestlé dubs “smaller, low-growth brands”, including Rolo, Munchies and Fruit Pastilles, whose production will be split between Halifax and elsewhere in Europe. Although these lines will continue, the closure of Fawdon could signal the prioritisation of fewer, but bigger, brands.

In many ways, it’s hard to argue against that logic. According to figures for The Grocer’s latest Britain’s Biggest Brands, Nestlé’s three fastest-growing brands in 2020 were Aero, Kit Kat and Smarties. They shot up £22.8m, £14.1m and £7.6m respectively [NielsenIQ, 52 w/e 26 December 2020].

In contrast, smaller brands like Lion, Quality Street, Yorkie and Dairy Box saw a slump in sales. The Rolo and Munchies brands made at the Fawdon factory were up, but by far less than the likes of Aero.

It’s understandable Nestlé has therefore focused its innovation efforts on the big-hitters. In the past year, we’ve seen the launch of a vegan Kit Kat – KitKat V – as well as a dark chocolate version of Aero, as it seeks to tap into new customer trends.

But there will be many hoping its strategy doesn’t go too far. Names like Rolos, Munchies, Fruit Pastilles, Fruit Gums and Matchmakers have all found their way into the hearts of the public, even if they aren’t quite as high-profile as the Kit Kat.

So although the 600 UK jobs are the real concern here, many will also be hoping Nestlé doesn’t focus on big brands to the detriment of its smaller lines.