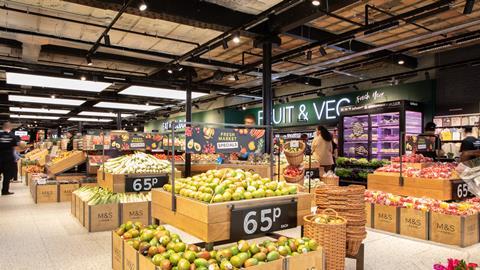 Positive news for M&S at last, but its turnaround is far from over

Amid the carnage of tumbling profits and further setbacks in the M&S clothing business, there was a glimmer of hope today as the food side of the group returned to growth for the first time in two years.

Certainly, chairman Archie Norman and CEO Steve Rowe appeared to be in good spirits as they talked journalists through the latest half-year financial results at the London Stock Exchange.

The pair didn’t gloss over the terrible figures (it’s pretty hard to dress up an 8% fall in clothing & home revenues, and group profits tumbling 17%) but there was a sense of optimism that has been missing for quite some time.

Norman said the past three months had been the best in his 18-month tenure at the group. Rowe hailed the best performance for some years on the food side.

Total food revenues rose 1.2% to £2.85bn in the six months to 28 September 2019, with like-for-like sales up 0.9%. But it is the second quarter of that period that really contains the seeds of hope for a recovery. Volumes jumped by 3.3% and like-for-like sales rose by 1.4%, compared with just 0.4% in the first quarter (which actually fell by 1.4% when the benefits of Easter are stripped away).

As Rowe was keen to point out, this is ahead of all its rival supermarkets – with the success even more marked in the 12 weeks to 6 October as volumes rose 4.8%, way ahead of Co-op at 3% and Sainsbury’s at 0.2%. Asda, Tesco, Waitrose and Morrisons were all in negative territory.

Rowe, as he goes after the family shopper, said M&S was now more competitive than it had ever been.

That all comes at the expense of some margin – which is offset by cost reductions and fewer promotions – but it’s a necessary evil if M&S is to get shoppers to fill up their baskets and trolleys, rather than just buying enough for one meal.

New core ranges, such as Plant Kitchen, Cook With and Best Ever, have also been a hit with consumers – though at the expense of traditional ready meal sales. And the trials of the new format stores in Clapham and Hempstead Valley, with their broader, larger ranges, are a much-needed glimpse of the future in food for M&S.

But despite the successes, one exciting quarter does not a turnaround make. More answers will be provided by Christmas, with the focus on lower prices and higher volumes – alongside the M&S reputation for quality – likely to provide more good news.

And a lot is riding on Ocado’s switch from Waitrose to M&S in September next year. Can M&S get the range to satisfy a full shop? Rowe said everything was on track and going well, but it is still early days.

The M&S boss wouldn’t be drawn on whether average basket sizes had increased at Clapham and Hempstead Valley. “We are seeing a slightly broader shop from consumers and slightly more items as people shop more into produce and more into frozen and groceries and ambient than in the normal stores,” he said. “But it is only a handful of weeks in, in a couple of stores, so I don’t want to judge it yet. It is encouraging and customers are telling us they seeing more of a range.”

Again, Christmas will reveal more, and more store renewals are needed for it to have any impact with customers.

Work to modernise the supply chain also needs to move faster as high levels of waste and low levels of availability hamper the food business. A new operating model trailed at the York Vangarde store has been deemed a success and is being rolled out to a further 85 trial locations. Time, again, will hold the answers.

If the scale of the challenge wasn’t big enough already, there is the ongoing nightmare in the clothing & home division to contend with. There is no hiding the monumental difficulties in turning that side of the business around, with Rowe admitting the plan was 18 months behind where it should be.

But Archie Norman poured cold water on suggestions that M&S could split food and clothing into two separate businesses. As he pointed out, the two divisions are entwined, with shared entrances, shared stockrooms and shared store managers. Untangling all that comes at a cost.

And all that is without touching on plans for the international business, aims to become digital-first and improve the website, and delivering further cost savings.

The original headline set to accompany today’s half-year results was ‘Transformation beginning to bear fruit’, according to Norman. Until, that is, the board pointed out that there was not exactly a lot of fruit in these results. ‘Far-reaching change – delivered at pace’ was the preferred option.

The mangoes may be flying off shelves but a lot of the fixes in food were really quite low-hanging fruit. The next stage of the transformation won’t be so easy.