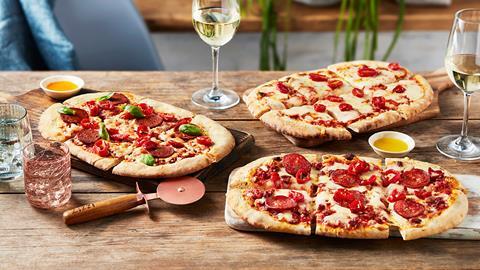 The hike in the VAT rate on hot takeaway food dented Domino’s sales in the first quarter of 2022, the pizza giant reported today.

With the VAT rate on takeaway pizza set to return to the normal rate of 20% from this month, as the government’s Covid mitigation measures come to an end for hospitality, the rest of the year could prove even more challenging. No surprise, then, that CEO Dominic Paul says Domino’s is “redoubling our focus on offering our customers the best possible value this year”.

Rising prices for takeaway pizza could prove an opportunity for supermarket pizza brands.

Indeed, we’ve already seen premium chilled brands such as Crosta & Mollica and Zizzi cashing in on the ‘big night in’ by recreating the restaurant experience on the cheap. In the year to July 2021, retail sales of pizza grew 3% to £1.2bn [Kantar], with Crosta & Mollica more than tripling sales to add over £2m [Nielsen].

Retail does, of course, have its own challenges to contend with. Last year, promotions accounted for 35.6% of chilled and frozen pizza sales, worth £422.6m [Kantar 52 w/e 11 July 2021]. So incoming HFSS legislation could hit sales hard.

But the category has already made some impressive strides in launching healthier lines as the government’s clampdown on promotions of HFSS food looms.

Take, for instance, Dr Oetker, which debuted what it claims to be the UK’s first fully non-HFSS pizza brand, The Good Baker, in September. And Goodfella’s, which last month unveiled a trio of non-HFSS stonebaked pizzas. There have been reformulations, too. Dr Oetker last month relaunched its Ristorante brand with non-HFSS recipes.

Unlike some other HFSS products such as crisps and chocolate, reformulating pizzas is “not rocket science”, says Dr Oetker head of marketing Paula Wyatt. “It is often a case of swapping typically high-fat toppings, like cheese and meat, for reduced-fat versions,” she says.

That could include swapping bacon for ham, for example. Or opting for a pepperoni with a higher meat content, and thus less fat (although such alternatives do come at a higher price).

Bases can be problematic, too, being typically high in salt and oil. British Frozen Food Federation CEO Richard Harrow says an “element of salt” will always be needed to create the structure of the pizza base.

But pizza makers have already done a lot of the legwork here. Many have been steadily tweaking bases and sauces for years. In fact, Dr Oetker’s Ristorante pizza bases were one component that didn’t require a major overhaul, says Wyatt. “Over the years, there have been very small adjustments almost nobody notices.”

Goodfella’s, meanwhile, has opted for thinner bases on its latest non-HFSS pizzas but has also been “on a journey to nutritionally optimise” its portfolio “for a number of years”, says Lauren Woodley, group nutrition leader at owner Nomad Foods.

At the same time, Goodfella’s has increased fibre content to win back points under the nutrient profiling model. As a result, “we have been able to avoid the use of low-fat cheese or reduced-fat meats”, Woodley says.

Similarly, Dr Oetker’s The Good Baker boasts sourdough and multigrain crusts, with added seeds, a nutritional advantage creating wriggle-room for toppings. “The proteins in some of the grains get us good ticks and we can take off some bad ticks,” says Wyatt.

Of course, shoppers will have the final say on the success of new recipes, but early signs are positive. The Good Baker sold 287,000 units in the 30 weeks to 26 March, putting it on track to exceed £1m sales in its first year, according to NielsenIQ.

Dr Oetker will likely be hoping that boosting Ristorante’s health credentials will help turn around that brand’s fortunes, after what Wyatt calls “a difficult few years”. Ristorante value sales fell 6.2% to £46.1m in the 52 weeks to 11 September 2021 [NielsenIQ].

It won’t be possible to reformulate all pizzas to beat the HFSS rules. Takeaway-style SKUs with sugary sauces, stuffed crusts and multiple meaty toppings are likely going to exceed the nutritional limits. But even if shelf prices rise on such lines because of the promotions ban, they’ll still be significantly cheaper than a takeaway pizza. Especially when the VAT on the latter returns to 20%.

And with the likes of Domino’s set to face the same ban on advertising of HFSS products on TV and online before 9pm, the supermarket pizza category looks poised to take a bigger slice of sales in years to come.