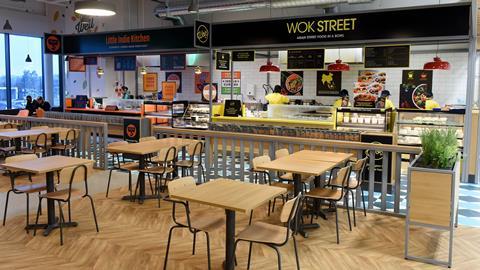 There has been much speculation of late regarding what the future of Sainsbury’s might look like following the collapse of its merger with Asda. This week we got a big clue – the future is foodservice.

The Grocer revealed this week that Sainsbury’s has restructured its fresh foods department, splitting it in two to tap into new growth opportunities.

The shake-up has been inspired by the success of its new experimental format at Selly Oak in Birmingham and will see it look to drive growth across its concessions and cafés.

It would seem that the 67,000 sq ft store, which opened in November and is a hybrid of traditional supermarket and department store, has been a rip-roaring success. What it sees as its ‘value-added’ food offer, which includes a Food Market area with capacity for 180 seated diners, has gone down particularly well. The food court features a host of fast food concessions such as Little India Kitchen, Fresh Kitchen, Wok Street and Sushi Gourmet.

The retailer has been emboldened by this success in an ‘if you build it they will come’ kind of way to take what it has learned in Selly Oak and run with it. It sees great opportunities for its counters, bakery, concessions, food to go, food ordering and cafés.

Of course, Sainsbury’s is not the only retailer looking seriously at foodservice in this way. In the case of Waitrose, hospitality (as it refers to it) has been a key pillar of its growth strategy for a few years now.

I can confess that I have previously been sceptical of this, wondering if retailers were fiddling while Rome burned by tinkering around with wine bars, sushi counters and the like, while the discounters were eating their lunch in terms of core grocery.

But now I think this foodservice strategy may just be the right one, particularly for retailers keen to emphasise their foodie credentials. Why get dragged into a price war they will never win? Surely it is better to truly differentiate yourself from Aldi and Lidl by taking your customer service to the next level, making the shopping experience far more pleasant and turning your stores into genuine destinations.

The lines between grocery and foodservice have been blurring for years in convenience, with in many cases traditional grocery retailers losing out to new, exciting specialists. But when it comes to supermarkets, the big grocers are actually perfectly placed to take advantage of this trend and actually own it. They have the space and the locations – they just have to make them attractive places to go.

The slight irony in all this is that it has echoes of Tesco’s hypermarket plans under Philip Clarke, which have long since been abandoned, and Tesco is going the other way now by cutting back on its serve-over counters and filling stores with tonnes of discounter (Jack’s) products.

Tesco clearly feels it can take on the discounters head-on, but this just isn’t an option for Sainsbury’s and Waitrose. It will be fascinating to see which strategy has the legs and pays off in the long run.