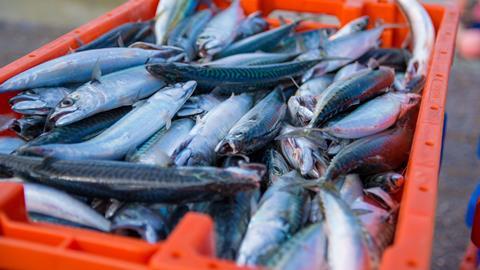 Seafood has been at the centre of the Brexit debate since Nigel Farage led a flotilla of fishing boats up the Thames calling for Parliament to “take back our waters” ahead of the referendum. At the time, Bob Geldof – who had organised a rival Remain fleet – yelled the former UKIP leader was “no fishermen’s friend” for campaigning for Brexit. And it turns out the rock star was right.

Chaos at the borders since the end of the transition period has sent the UK seafood sector spiralling into crisis, with Scottish processors losing upwards of £1m a day in revenue and fishermen facing an 80% collapse in prices for some species at ports. Amid warnings of fish left rotting on Cornish boats and on docks, seafood processors have held protests outside Parliament, warning that without government intervention the industry could collapse.

It’s an embarrassing situation for PM Boris Johnson, who like Farage has long held the UK seafood sector up as a key beneficiary of Brexit. He might not have traded insults with Geldof on the Thames, but Johnson did wave a kipper around on stage at the Conservative leadership hustings to, albeit inaccurately, highlight the plight UK fish smokers were facing a result of regulations imposed by “Brussels bureaucrats”.

Having already angered the country’s fishermen by compromising on the EU trade deal, the PM could no doubt do without public protests outside Parliament over export delays.

Unsurprising, then, that the government has been quick to act to quell the rising tide of anger, yesterday unveiling details of a £23m government fund to support the seafood businesses “most adversely affected by the Covid pandemic and the challenges of adjusting to new requirements for exporting”.

Processors who can provide evidence of a “genuine loss” in exporting fish and shellfish to the EU will be able to claim up to £100,000 to cover losses incurred since 1 January 2021. And that’s on top of the £100m fund Johnson has pledged to help modernise UK fishing fleets and “rejuvenate a historic and proud industry in the UK”.

Donna Fordyce, CEO of Seafood Scotland, described the handout as a “a much-needed sticking plaster” for the sector, though she added it would not “completely staunch the wound” and repeated calls for the UK and EU to grant a six-month grace period for fish exports.

Still, £23m is better than a slap in the face with a wet kipper. And it’s more than the UK meat sector – which is facing just as a big a threat from Brexit-related border chaos – has been promised.

Because fish isn’t the only fresh food suffering as a result of Brexit disruption. The meat sector warned this week that tonnes of meat was stuck rotting at European ports as a result of “eye-watering” bureaucracy.

Dismissing the government’s suggestion that current delays in UK/EU trade are simply “teething problems”, the British Meat Processors Association has warned the “archaic” paper-based customs system is now threatening “a serious and sustained loss of trade with our biggest export partner”.

That’s bad news for both meat processors and British farmers. Trade with the EU is essential for carcase balance, and any loss of export revenue will inevitably hit profitability. You only have to look at the situation with mince a year ago to see how quickly things can spiral out of control when carcase balance is disrupted.

In the long run, it could also spell bad news for British shoppers. Because unless they suddenly develop an appetite for pigs heads and offal, prices for popular cuts would have to rise to protect the profitability and the viability of the sector. Not least because the UK is set to ramp up its own border controls come April, with a lack of vets on both sides of the Irish border spelling potential trouble for imports.

Then there’s the potential consequences for UK food security, should the fresh meat sector face major disruption or collapse. Something that is particularly worrying given the disruption we’ve already experienced as an island nation as a result of the Covid-19 pandemic.

Let’s hope, then, that rather than just handing out cash to fishermen, the government rolls out a more comprehensive package of support to help the entire UK agri-food sector survive Brexit. Because without it, the long-term future of affordable British food is on the line.