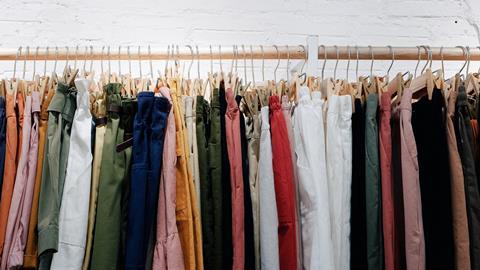 Textiles 2030: fashion industry pledge is a smart solution with some serious backers

With the easing of lockdown restrictions, Brits have been enjoying simple out-of-home pleasures with abandon. Like going to the pub. In fact, so many pints have already been sunk that brewing giant Heineken says demand for Moretti and Amstel, two of its biggest brands, has “totally surpassed our most optimistic forecasts”.

And then there’s clothes shopping. Last week, Primark owner Associated British Foods reported record sales at more than half of its stores in England and Wales after they reopened on 12 April. “Large queues formed outside some shops before 7am,” The Guardian reported.

The nation’s enthusiasm for fast fashion is further suggested by the imminent flotation (in Warsaw) and expansion of Pepco, owner of Poundland and its value clothing brand Pep & Co.

So, with the nation’s wardrobes bulging with cut-price clobber, it’s extremely timely for Wrap to this week launch Textiles 2030. The sustainability initiative is the “most ambitious 10-year programme for clothing and textiles in the world” says the organisation. Its aim is “to transform the fashion and textiles sector into a climate-neutral and profitable industry that is fit for the future”.

And it’s backed by a wealth of high street big-hitters, including Tesco, Sainsbury’s, M&S, John Lewis, New Look, Next and – yep – Primark. They’re among more than 60 brands, retailers, recycling organisations and other affiliates aiming to “slash the environmental impact of UK clothing and home fabrics through practical interventions along the entire textiles chain”.

Their two targets are cutting carbon by 50% and reducing the aggregate water footprint of new products by 30%.

To achieve this, they’ll commit to circular behaviour such as making products more durable and recyclable and “set up partnerships to supply and use recycled fibres for new products”.

Not only is the arrival of Textiles 2030 apropos, it’s also very welcome. The fashion industry is often accused of being one of the world’s worst polluters. Its impact on the environment has worsened in recent years due to the rise of fast fashion, according to a report last April in Nature. It stressed “the need for an urgent transition back to ‘slow’ fashion”.

That seems unlikely to happen – at least for the time being – given the financial uncertainty so many consumers are facing right now. Primark and its like will continue to be go-to stores.

Textiles 2030, therefore, offers a stylish solution. And it’s a smart one, given how retailers and brands have made strides in other areas of sustainability even during the pandemic.

How Wrap’s latest initiative pans out, of course remains to be seen. But one thing’s certain: it’s bang on-trend.