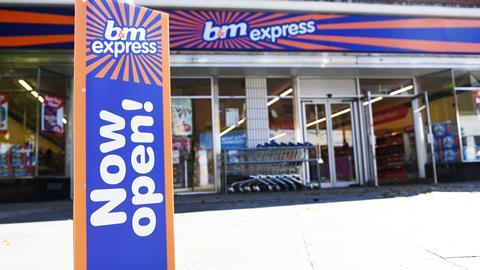 The key to success as a variety discounter? Copy B&M

Bargain World, which this week opened the first of 25 stores planned between now and October, is of course right to copy B&M’s multi-price model.

The new chain is selling 3,500 SKUs, consisting of 60% fmcg and 40% general merchandise, with prices ranging from 15p for a Freddo to £15 for bedding.

The model means it can undercut pound shops with popular brands at 89p and 99p – as can B&M. In fact, B&M’s ability to do the same was one of Chris Edwards’ (son of the entrepreneur of the same name who founded Poundworld) reasons for devising One Below, the new chain that sells at multiple price points up to a pound.

But selling above the pound also gives Bargain World more agility to constantly grow its range.

Bargain World retail and operations manager Terry Meekings told me: “The pound retail market is pretty much finished. You cannot just operate as a single-price retailer. Either you’ve got to buy clearance stock, where you can get a great margin, or your range becomes multi-price, exactly like B&M started out and they’re doing very well.”

You only have to look at B&M’s performance, and the slow disappearance of the pound shop concept, to see he has a point. B&M is expanding at a rate of knots. It said in its January trading update it was on course to open a gross 56 new stores this year. Every week it seems to be advertising for store managers in new areas.

The threat of B&M was one of the reasons Poundstretcher – always a multi-price discounter – snaffled the name Bargain Buys after that chain collapsed into administration last year, along with its owner Poundworld. It puts Poundstretcher “in that B&M, Home Bargains space where you’re a hard discount retailer”, property director Gerry Loughran told me last year, after stores started changing fascia.

Poundworld was supposed to be returning to the high street this year, after Leeds businessman Manni Hussain bought the name from administrators Deloitte in October. But it’s May now and there is still no sign of that happening.

Meanwhile, Poundland’s latest quartlerly results put its “broadly flat” but above market average performance down to Pep&Co clothing shops within shops, meaning its success too is driven by multi-pricing. Which will be exactly why Pep&Co has recently rolled out across the whole estate.

One Below has already opened more than 30 stores since launch in February – and Poundland branches are rumoured to have taken a sales hit where Edwards’ new chain has arrived on the doorstep. It is Poundland’s gradual evolution into a multi-price retailer, where everything is rounded to a pound, that may help it maintain an advantage.

In fact, beyond its ability to undercut, and avoid the complexity of mix-and-match deals to bring price points up to £1, it’s difficult to see the strength of One Below’s model. But it’s early days for the chain and if anyone can do it, it’s probably the Edwards family.

It’s early days for Bargain World, too. With only one store open so far, and Meekings intriguingly unwilling to name the owner, all bets are off on its success or failure. But the concept seems to be right on the money.