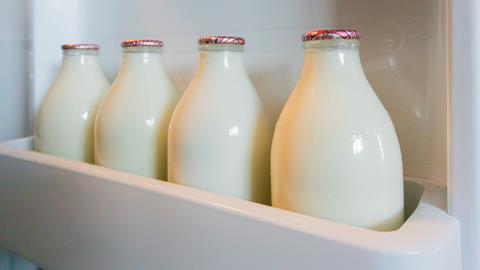 War on plastic needs a concerted effort, not gimmicks

Over the course of the pandemic, Morrisons boss David Potts has shown a canny knack for milking customer nostalgia.

So much so, surely, that any flak received over his controversial pay bonus would have simply bounced straight off his Home Guard issue tin hat.

Today, as the globe marks ’World Refill Day’, Morrisons got us in the Blitz spirit all over again by bringing back the glass “pinta” in selected stores. It transported our minds back to those good old days when the milk float used to bring us our daily dose of calcium – and the birds used to get to it first.

While customers’ eyes may have misted over at the cost of the products compared with their plastic alternatives  – Morrisons sells a six-pint plastic bottle for less than the price of two of the trial 90p glass versions  –  the move has been warmly greeted by anti-plastic campaigners.

It comes as other supermarkets also step up their war on the material. Similarly timed to coincide with the global day of refills, Asda revealed it was expanding its refill station concept, first trialled at its sustainability trial store in Leeds in October. It will now include a raft of new big brand tie-ups and concepts.

But the big question regarding these (and other industry) moves remains their scaleability. While Morrisons has indicated it is looking at tie-ups with dairies nationwide, the fact remains its glass bottle trial is confined to just 11 stores, in Kent and Sheffield.

Likewise Asda’s rollout. While the list of suppliers such as Nestlé, Unilever and Mars is very impressive, it will only involve five stores and they will not all be up and running for several months.

Certainly it’s debatable how high on the agenda refills will be for the Issa brothers, who finally passed the final hurdle to their takeover bid today. Starbucks drive-throughs are perhaps more likely to be on their agenda than a return to the days of the milkman.

There was also an unintended slice of irony in Asda’s claim that customers had been driving from miles around to get to its Middleton trial store because they wanted to reduce their impact on climate change.

The point is, until these initiatives are available at everyone’s local store, they risk remaining just sideshows.

Plus, there is the issue of cost. Although Asda has been keen to ensure price parity, many eco-friendly alternatives command a hefty premium on their less sustainable counterparts.

A poll by eco campaign group City to Sea claims over half of Brits (55%) think that supermarkets and big-name brands are not doing enough to address plastic pollution. It would be interesting to find out how many would be prepared to pay far more for their products if they were plastic-free. One suspects the percentage might be somewhat lower.

To win the war on plastic, the industry must both find cost-effective alternatives and persuade a critical mass of customers to change their shopping habits. There’s still a fair way to go before that happens.

That said, there were still plenty of positives in today’s news developments. It was certainly interesting that Asda’s trial included the rollout of refillable packaging on branded products in ordinary aisles, rather than only in dedicated refill areas.

Unilever is similarly trying to make the practice mainstream, working with both Asda and the Co-op to roll out reusable stainless steel bottles carrying brands such as Persil, Simple, Radox and Alberto Balsam. It hopes these will become part of a new ‘return on the go’ model, where shoppers can pick up a pre-filled reusable bottle from shelf and return in-store once used (presumably along with a trip to the DRS vending machines).

But these sort of innovative schemes remain very much the exception, not the rule, and pressure is already building on supermarkets to prove they are serious.

Jo Morley, head of campaigns at City to Sea, points out that despite today’s moves, supermarket efforts are currently “a drop in the ocean”.

And with the plastic that is littering those oceans set to remain a huge issue, it’s not going to be solved by anything that proves to be an expensive gimmick.