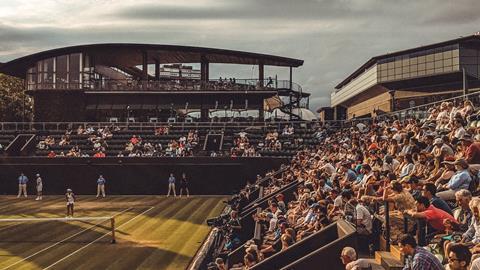 What can businesses do to help insects and keep British-grown produce at Wimbledon?

For those able to catch some of the action, what a treat it has been (especially from young British hopeful Jack Draper, who nabbed the first set of his match against reigning champion Novak Djokovic earlier on).

Alongside the thwack of wool-clad balls on taut racket strings, the spectators lucky enough to be present in SW19 today will have also been treated to the slosh of fruit and cucumber slices in glasses of Pimm’s and the sound of forks chasing stubborn British-grown strawberries around bowls.

But while the world’s tennis circus will probably continue to roll into the All England Club once a year for many decades yet, there’s sadly no guarantee it’ll continue to be accompanied by British-grown produce, according to dairy co-op Arla and invertebrate conservation charity Buglife.

Why? Because as things stand, British pollinators are facing extinction within 25 years, according to the pair.

The facts and figures from Buglife make for especially shocking reading.

It estimates there’s been a 40% decline amongst most British pollinator species since the 1980s.

The shrill carder bee, which was one of the most common species of bumblebee in the south of England 40 years ago, is now confined to just a handful of sites in London, the south west and south Wales.

According to Paul Hetherington, director of fundraising and communications at Buglife, this decline has been caused by habitat loss and a loss of connectivity between the remaining habitats.

“These changes make pollinator populations highly vulnerable because if you have some kind of disaster like a fire, chemical spillage or flood at the one site, you lose all of them because they can’t get away,” he explains. “You’ve also got the danger of disease, which spreads more easily in clusters than if they were more spread out.”

Arla is one of many businesses and organisations that have made pledges to help pollinators escape this downward spiral in recent years.

The dairy co-op – which launched its Arla Project Pollinator Programme in 2020 to help build connectivity and habitats by lining its farmers’ fields with wildflower channels – announced an extension to this initiative today.

It will give out 100,000 seed packs to allow consumers to create their own ‘pit stops’ for pollinators travelling between habitats – a move Buglife says could genuinely help bees and other insects.

Another positive move in recent times has come from apple and pear growers, many of whom have installed ‘bee hotels’ for solitary bees in their orchards, according to trade body British Apples & Pears.

Not all such moves from the industry have won praise, though. Take M&S’ plan to introduce millions of honeybees to the UK, which campaigners warned could damage exsiting bee populations.

“They’re basically a farmed animal and the numbers fluctuate more on how many people keep them,” says Hetherington. “If you just put lots more honeybees in without creating the forage [area from which pollinators can feed], what you’re actually ending up doing is starving the native population of wild bees.” He adds that 10 hectares are needed in order to support just one honeybee hive.

Retailers have a big role to play, he adds, but they should make sure they’re working with experts. “Our door is always open to them,” Hetherington says.

Ways in which retailers could do their bit include planting ‘vertical meadows’ on the sides of stores or looking into turning their flat roofs into wildflower meadows.

They could also reduce light pollution, which distracts night-time pollinators like moths from seeking out flowers.

So, while the storm clouds hanging over pollinators could prove to be more damaging to play than a rainy day at Wimbledon, the situation can still be salvaged yet.

Whether the same can be said about Britain’s tennis prospects at this year’s Wimbledon championships remains to be seen.