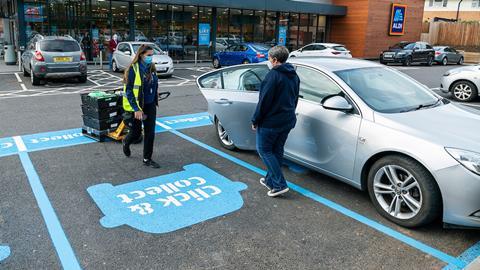 Why did Aldi struggle this Christmas?

Tesco has yet to report, but among a sea of winners, it’s already clear from the Kantar numbers, out this week, who the biggest ‘loser’ was this Christmas: Aldi.

In contrast Aldi’s 6.3% growth barely exceeds the 5.9% run rate this time last year, despite the boost afforded to all grocers as a result of the lockdown, and despite Aldi continuing to open new stores at the same rate as 2019.

Aldi was keen to get out of the blocks first on Monday, boasting a 10.6% year-on-year rise in sales in the four weeks to 24 December, but with no mention of like-for-likes, it’s not a complete picture.

The more you look into Kantar’s numbers on Tuesday the worse it looks. Till roll data for the four weeks to 27 December showed Aldi managed 5.5% growth, the lowest of the major multiples by far. Tesco’s sales grew 11.3% in the four weeks, and perhaps most interestingly, Lidl was flying comparatively, at 17.9%. Iceland did even better, at 18.9%. All grocers combined grew 10.8%.

Critics might say Lidl bought some of its sales, with a voucher promotion offering £10 off a £40 basket in December. Nevertheless, Black argues: “Aldi hasn’t fallen off a cliff but it’s certainly got into a laggard stage.”

After years of watching Aldi eat into its market share, Tesco took the gloves off last March and has been hammering home its ‘Aldi Price Match’ campaign ever since.

Unfortunately for Aldi, lots of its customers do walk into the UK’s biggest retailer’s stores. “A lot of people argue Aldi caters for a full shop but for a lot of others it doesn’t, so they end up going to another supermarket,” says Brereton. “At Tesco, they walk in, see this call-out of Aldi and it can be quite swaying.”

Tesco’s campaign promises to price match Aldi on hundreds of products. In September, Tesco escalated the battle further, relaunching its Clubcard loyalty scheme, with discounts of up to 50% on branded products.

Add to that the fact Tesco stocks many more brands, with a range running well into tens of thousands of products compared with a couple of thousand at Aldi, and the sway of the campaign grows stronger.

“Some Aldi shoppers have gone back to Tesco and thought actually this is much better than I remember and I’ve missed the choice,” argues Black.

Another factor has been Aldi’s lack of online capacity. Both Aldi and Lidl saw their hard-won market share eroded at the onset of the pandemic while the big four benefited from the online boom that came with Covid.

Lidl held its nerve, doubled down on its bricks & mortar model and even abandoned what online ambitions it had been entertaining previously. Lidl Digital Logistics, a company set up in 2018, was dissolved in the autumn. That followed digital director Alex Murray leaving the business and Lidl GB CEO Christian Härtnagel telling a newspaper that, despite the lost sales opportunity, moving into online was the wrong way forward given its hard-fought discounter model.

Aldi, in contrast, launched not one but two major online trials, starting with Deliveroo in May followed by click & collect in September.

Aldi’s trading update on Monday said thousands of customers had used the service in the run-up to Christmas. The question is, was it worth it?

Click & collect was expected to reach about 200 Aldi stores by Christmas and Deliveroo about 130. Combined, and assuming no overlap, that’s more than a third of Aldi’s estate in which staff suddenly have store-pick duties in an already highly cost and efficiency-focused working environment. For click & collect, they must also take the shopping out to cars.

“These things take a toll on a store in terms of organisation and the structure of what staff are doing,” says Brereton. “Staff are usually quite busy at Aldi. They’re at the checkout or bringing out stock in shelf-ready packaging.”

That toll can be an impact on store standards, with a knock-on effect on sales, Brereton argues.

“The other supermarkets have a lot more experience at doing online,” he adds. “Aldi need to be really careful they’re not crowbarring online into their stores and really think about how they’re deploying it.”

Aldi has also been at a disadvantage to Lidl as its stores are smaller: Aldi’s average store size is 12,000 sq ft vs 14,000 at Lidl. That may have been a concern to shoppers worried about catching the coronavirus in jam-packed stores.

But experts believe the divergence in the performance of the two discounters – which for so long were running neck and neck – reflects the continued improvement in Lidl’s offer.

“I think the Aldi-Lidl axis head-to-head is a really important part of what’s happening at the moment,” argues Black.

Aldi was the first to arrive in the UK, in 1990, four years ahead of Lidl. Its marketing has been “first class”, for many years, positioning it as the default discounter in the consumer mind over Lidl.

“Aldi’s touch with the media is brilliant,” notes Black. “They got involved the Olympics, put the Union Jack all over their offices.”

It’s helped Aldi comfortably outperform its rival for much of the past decade, but Lidl has caught up, Brereton argues, and has become a more effective retailer.

“Lidl is proving a much more formidable competitor. I think it has adapted to the shopping tastes of the British in a way that Aldi hasn’t,” he says.

“Lidl were the first to bring fresh bread into their stores. They have a bigger proprietary brand participation than Aldi. Their Deluxe range is a very good premium proposition and they’ve brought quite high-category wines into the mid-price market with great panache.

“It has become a superior retailer and it will be quite costly for Aldi to get to where Lidl is, not in terms of price but proposition.”

Of course, Lidl remains bricks & mortar only, while online’s share has grown from 7% a year ago to 13% now, and is forecast to continue growing. It raises the possibility that the bad-tasting medicine Aldi has taken this year could prove worth it in the long-run.

But Lidl is playing to its strengths. Aldi, as it struggles to adapt its offer for an online shopper, is outside its comfort zone. And it’s hurting.