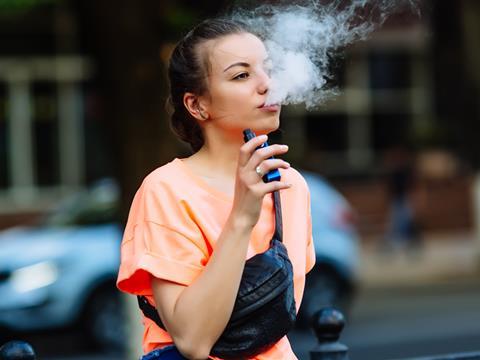 A quarter of the nearly 14,000 questioned reported they had “ever used” e-cigarettes

A new government report has found a significant reduction of smoking rates in children since 2016, while the number of underage vapers has remained largely unchanged.

Current and regular e-cig prevalence remained at 6% and 2% respectively. Current e-cig use increased with age, from fewer than 1% of 11-year-olds, to 11% of 15-year-olds.

Pupils who had “ever smoked” were much more likely to also have “ever used” an e-cig than those who had never smoked.

Most regular smokers (92%) reported having used e-cigs compared with 14% of pupils who had never smoked.

Deborah Arnott, chief executive of Action on Smoking and Health, said it was “excellent news” that only one in six children aged 11 to 15 had ever tried smoking - a significant decline compared with 1996 when it was just under half.

“Furthermore, in line with the ASH survey data for 2019, the proportion trying e-cigarettes has not increased and vaping remains largely concentrated among those who are already smokers,” she said.

“This provides reassurance that our regulations are working and vaping has not become the “super-cool” phenomenon among young people in England that it is said to be in the USA.”

UK Vaping Industry Association board member Ben Timberley said: “The statistics added to the growing body of evidence which showed that the responsible steps the vaping industry was taking to prevent young people accessing products were having an effect.

“Our own association code of conduct insists on robust online age verification methods, a Challenge 25 policy in-store and sets a clear expectation that products are only to be marketed towards adult smokers, vapers and consumers of other nicotine products.

“UKVIA members will continue to work together to ensure high standards of youth access prevention across the industry, whilst helping the remaining seven million smokers in the UK make that switch to a far less harmful product.”