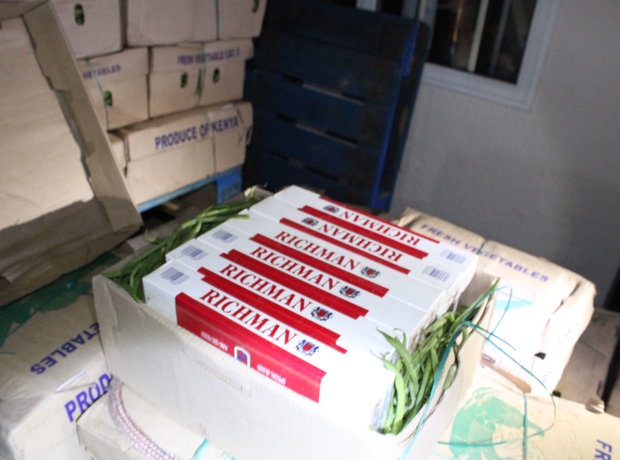 A criminal gang from London have been jailed for a total of more than 15 years for smuggling over 14m cigarettes and evading £3m in duty.

The group were sentenced on Tuesday, 21 July at Isleworth Crown Court after being arrested by HM Revenue and Customs (HMRC) in May 2012.

They used a freight company as a cover to smuggle the cigarettes inside boxes of fruit and vegetables which were flown into the UK from Dubai through East Africa.

The group was led by Feroz Abubakar Batliwala , an Indian national with a UK address of Ringway, Southall, London and a resident of Dubai, who pleaded guilty to conspiring to cheat Her Majesty the Queen and the public revenue. He was sentenced to eight years, six months in prison and banned from being a company director for 12 years.

Krishan Solanki, an Indian national with a UK address of Raleigh Road, Southall, London, was found guilty of the same offence and sentenced to seven years in prison and banned from being a company director for ten years. He had accepted the goods into the UK and managed the warehouse operation in Uxbridge.

Meanwhile, Ashiquir Ali of High Wycombe, Buckinghamshire, who repackaged the cigarettes into laundry bags, which were collected by customers’ and delivered to addresses in the Midlands, pleaded guilty. He was sentenced to 20 months in prison, suspended for 24 months and ordered to carry out 100 hours of unpaid work.

Confiscation proceedings to reclaim the criminal profits are under way.

“This was a major investigation into the exploits of three criminals attempting to flood the UK with illicit cigarettes,” said John Cooper, assistant director, Criminal Investigation, HMRC.

“These men abused their position of trust as approved importers to steal millions of pounds from law-abiding taxpayers – money which should have gone into funding the UK’s vital public services.”

Batliwala and Solanki were directors of London freight company, Scanwell Freight Services in Feltham and ran an Enhanced Remote Transit Shed (ERTS), an approved freight forwarding company dealing in perishables. This approved status was removed on 25 May 2012.