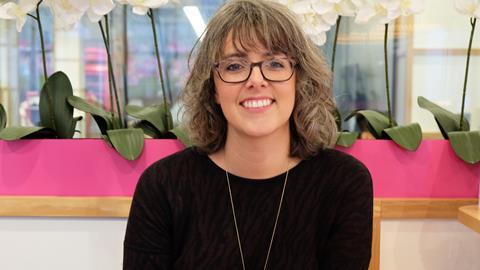 Since winning The Grocer’s TNT in 2016, Ferguson has used her endless energy to make a big impact. She talks about her new role, her career to date and the industry’s next big challenge

Jemima Ferguson seems to have endless energy. When The Grocer meets Itsu’s new group brand and marketing director at the company’s HQ (or, as it prefers, ‘academy’) she has only been in her role for four months. In that time, she has already set up a sustainability forum and got up close and personal with the high street chain’s grocery supply chain.

“I don’t think necessarily all marketing directors would’ve gone straight there, but I knew it was very important. Looking at the opportunities to build on good work that’s happening and communicate it better and working out where we need to improve.” Even while we speak she’s in motion, tapping her fingers on the table in eagerness to get her point across.

So engaged does Ferguson seem in her role that it’s hard to imagine she could have ended up as a designer instead, her initial plan upon leaving Cambridge University with a first in English. Pursuing that goal she’d contacted Cook co-founder Ed Perry for a reference, having done some creative work for the company while studying, but he suggested she work for Cook instead. “So I got to write my own job description, almost,” she laughs. In doing so she quickly realised that she would “probably get a bit bored” of a pure design role, and moved in the direction of digital marketing instead.

In this way being part of a growing, entrepreneurial company like Cook gave her the freedom to experiment with new ideas, evolve her role, and grow her own remit. “So for example, I would say ‘I think we should be doing more video content, so I’m going to just try and do some’. They were very open to that kind of thing. Then, as I started to take on new responsibilities that came my way, my team grew and people would pick up the things I’d started whilst I went on to do the next thing. It evolved quite naturally.”

The Grocer’s Top New Talent: meet the class of 2018

Family: About to get married

Potted CV: Graduated with a first in English from Cambridge and joined Cook in 2010. Became a member of the senior team after five years as head of customer marketing and e-commerce. Joined Itsu in 2018 as group brand and marketing director and now very much enjoying eating sushi and noodles every day.

Best career decision: Going to work at Cook at 16

Business mantra: “Put people first, and everything else will follow”

Best piece of advice given or received: “Time taken out to get clarity is time well spent”

Film recommendation: Sarah’s Key for something you might not have seen, Interstellar for my hands-down favourite

Five years later, at only 28, she became the youngest member of the senior team as head of customer, marketing and e-commerce. “Having that level of influence and impact at the senior level on the whole of the business was what meant I stayed for eight-and-a-half years,” she says.

In fact, one of Ferguson’s proudest moments was creating and launching Cook’s click & collect service in 2014, something that delivered a 74% growth in online sales. “I was young, I’d only been out of uni and in my role a few years and I was essentially given responsibility and accountability for launching a whole new channel and designing the entire user experience from beginning to end, and it turned out to be one of the best launches in the company ever.”

Despite opportunities like that, Ferguson felt ready for a new challenge after eight years at the company and in 2018 was approached for the role at Itsu. “It was undeniably going to be a much steeper learning curve for the next few years than it realistically would ever have been at Cook, just because I knew the brand so well – I had my head around it and I knew the people, so it was a big leap, but I took it.”

Itsu, she says, is “surprisingly similar” to Cook. “They are both companies going through a period of growth – not only in terms of sales growth, but also growth in terms of ‘growing up’.”

“On the surface, it’s a much ‘bigger’ brand, so you expect it to feel ‘big business’, but it doesn’t at all – it’s entrepreneurial, it’s agile, it’s lots of very close relationships with people.”

One marked parallel Ferguson draws between the two companies is that both have very hands-on founders. As if to prove this point, Itsu boss Julian Metcalfe had bumped into us by the coffee machine before our interview and spoken animatedly about recyclable packaging.

Submarines, String Theory and surplus: the unexpected career of FareShare’s head of network

This, Ferguson explains, was sparked by an email she had sent to a journalist working on a documentary about recycling. “They said: ‘why don’t you recycle in front of house?’ As if it was the easiest thing in the world. It sounds like it should be easy, so I tried to explain some of the complications of it, because a lot of people who recycle front of house won’t actually then be recycling that stuff, because it can’t be soiled with any food at all.”

Tolerance of food contamination on recycling is about 0.5%, she says. “What they’ll often do is check whole lorries, and if one bag of a lorry is contaminated, sometimes the whole lorry load will get thrown away.” Clearly passionate about the issue and the brand, she says it is working “really hard” on it, but the company is not willing to “do what everyone else does”. “Because that doesn’t help the customer understand – they think it’s all fine and dandy, and that just doesn’t help change the overall situation.”

If solving the packaging issue is one of the biggest trends Ferguson sees evolving in the industry, another is plant-based eating.

At the moment, she argues, the “noise” is disproportionate to the level of sales in the area, but “we have to listen to the noise” because “if you look at it as a trend and assume the noise will translate, over the course of the next five years” then its impact will be “undeniable”.

Both packaging and plant-based touch on a central issue Ferguson believes industry will face in the coming years – sustainability.

“It’s not just where we need to have a better impact on the environment because it looks good – it’s genuinely ensuring the industry is sustainable – ie how will it function in 20 years’ time?

“We’re still only at the start of the journey, and there’s so much more customers don’t even really understand about the direction of travel. I’m interested to see what the next ‘Blue Planet effect’ will be. Will it be about the impact of eating red meat on the world?

“If you think about the past 10 years, the situation has changed a lot – growing population, declining resources and increased demand on food production.”

Highlighting these issues will be vital in attracting the next generation of new talent into the industry too, she believes. “Millennials and young people coming through will be thinking about those things so much more just naturally, because they’ll have to. They’ll be thinking: ‘our grandkids aren’t going to be able to eat unless we do something’.”

As issues of plastic waste and recycling, population growth and food waste continue to rise up the sector’s agenda, Ferguson is right in the middle of the action. Let’s hope her energy really is endless. She’s going to need it.