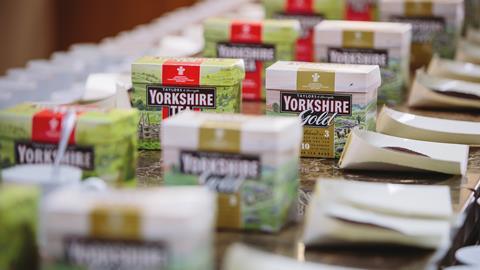 10 grocery brands that generated the most buzz in 2019

In the era of influencers, multiple marketing channels and consumers with short attention spans, it’s hard to get noticed as a brand. Yet grocery brands generated their fair share of buzz last year, according to this week’s YouGov Buzz rankings. From Bailey’s to Fever-Tree, here are the brands that stood out in their respective sectors.

Buzz scores relate to the full year of 2019, and are calculated by asking members of the public if they’ve heard anything good or bad about a brand in the past fortnight. Scores are out of a maximum of 10.

1. Alcoholic spirit with the most buzz: Bailey’s

In the absence of any big-budget TV ad, innovation was the likely cause of all the buzz around Bailey’s. Keen to prove it’s not just a festive tipple, it has been hammering out NPD for different occasions. Its summer-themed Strawberries & Cream variant made £11.9m in its first year [Nielsen, 20 April 2019]. It built on that with the launch of a Salted Caramel flavour in autumn, and this year it added a Red Velvet Cupcake flavour in time for Valentine’s Day.

McGuigan’s is also worth a mention here. Although it’s not in the top five, it did have the largest improvement in buzz after signing a £2m sponsorship deal with the UKTV Drama channel last year – its largest ever campaign in the UK.

2. Beer and cider brand with the most buzz: Guinness

Never underestimate the power of sports. BrewDog and Dark Fruits might have torn up the rulebook and generated cult-like followings, but Diageo’s stout stalwart stepped in to sponsor the Six Nations Championship at the last minuted after 14-year sponsor RBS dropped out. It backed the tournament with a sweet, sentimental short film called ‘The Purse’, about a duo of Welsh brothers whose late mother instructed their entire inheritance be spent on the tournament.

At brand level, Guinness has played it safe but hasn’t shied away from smart innovation. It is, after all, still the UK’s best-selling drink in the ale and stout category, with value sales of £77.4m in the off-trade [Nielsen 52 w/e 7 September 2019]. Past years have seen its Hop House 13 lager spin-off become one of the top selling brews in supermarket craft, and it is understood the brand is poised to launch a non-alcoholic Guinness in the near future.

Last but not least, Guinness made the headlines when owner Diageo announced it was ploughing £16m into removing plastic shrink wrap and ring carriers from the brand (as well as Smithwick’s and Harp), rolling out more sustainable cardboard packs from 2019 onwards.

3. Carbonate with the most buzz: Fever-Tree

It may have suffered from poor Christmas trading, but Fever-Tree still managed to create more buzz than any other soft drink brand of the past year. That’s even more than Pepsi Max and Coke Zero, which have both received substantial support from their brand owners in the wake of the sugar tax. That’s partly, of course, down to the sheer power of the gin boom. But it was also helped along by the launch of a new campaign featuring a Gin & Tonic Pairing Wheel just in time for last summer.

4. Chilled/frozen brand with the most buzz: Quorn

All the buzz around veganism means meat-free brands such as Quorn have a natural advantage when it comes to these rankings. But Quorn hasn’t just been sitting on its laurels and enjoying the benefits. It has been hot on the NPD front with launches such as a vegan fish range last January and ambient ready meals in June. That was all supported by a continuation of its TV marketing, which included an ad for its Chicken-Free Slices in spring.

Tellingly, fellow meat-free brand Linda McCartney also saw one of the highest improvements in buzz scores, as it embarked on a similarly ambitious NPD drive.

5. Confectionery brand with the most buzz: Cadbury

It may not ever top the buzz of the gorilla ad, but Cadbury has still managed to beat all other confectionery brands this year with a somewhat quieter, family-centric marketing strategy. The October launch of its ‘Families Reunited’ campaign, a mini-series that showed real parents trying to reconnect with their teens through hobbies, was a prime example of this approach. The brand also gained plenty of attention with its competition to find the next Cadbury Dairy Milk flavour. That seems to have translated to a boost in sales – Cadbury Dairy Milk was among the five fastest-growing brands of 2019, according to The Grocer’s Top Products survey.

6. Ambient brand with the most buzz: Yorkshire Tea

Distinctive marketing means Yorkshire Tea regularly performs well in YouGov’s rankings. This year, a 2.4 increase in buzz score means it also takes the title of biggest improver in the ambient category. It’s probably no coincidence that this was the year Yorkshire Tea enlisted the help of Sean Bean, who gave a rousing speech about “proper brews” in its July ad.

Also worth a mention is Marmite, which was the second biggest improver in this category. It had a bumper year in 2019 with a high-profile TV ad that saw Marmite haters hypnotised into Marmite lovers, and the launch of the much talked-about Marmite peanut butter.

7. Fast food/pub brand with the most buzz: Greggs

Here’s further proof of the power of veganism. Greggs was both the most talked-about brand in this category and the biggest improver. Although we can’t prove it was all down to the vegan sausage roll, it was a likely cause. The meat-free pastry prompted a media frenzy and – perhaps to its benefit – public disapproval from Piers Morgan. Many stores sold out of of the vegan delicacy. Greggs looks set to repeat the success this year with the vegan steak bake.

8. Snack brand with the most buzz: Ben & Jerry’s

A steady stream of innovative new flavours means Ben & Jerry’s regularly performs well in the YouGov rankings. Last year was no exception. Indeed, the return of its discontinued Baked Alaska flavour made for one of the most popular posts on The Grocer’s Instagram account. The brand looks to be keeping up the buzz in 2020 with the launch of a vegan Netflix & Chill’d flavour, already available on Ocado.

A special mention also goes to Lotus Biscoff, which was the biggest improver in this category following a raft of brand extensions, including an ice cream and Biscoff & Go snack packs.

9. Soft drink with the most buzz: Robinson’s

Robinson’s had a strong buzz score in 2018 – so there was no one big event to explain its position at the top of the ranks in 2019. If anything, last year marked more of the same. The brand continued to make a play for adult drinkers with its ‘Natural Break’ ad, which highlighted its lack of artificial ingredients.

A more interesting case was Ribena, which had the highest improvement in buzz score following the April launch of its £6.2m tongue-in-cheek ‘Blackcurrant Artistry’ campaign.

10. Supermarket with the most buzz: Aldi

Here’s another brand that consistently generates buzz. Aldi is usually at the top of YouGov’s full ranking, which spans across all sectors (it lost its top spot this year to Netflix). Last year, the discounter simply continued its strategy of cheeky advertising - most notably, it parodied Game of Thrones in a loo roll ad - and eye-catching innovations.

Meanwhile, M&S saw a massive improvement in its buzz score. Could this be fuelled by the return of the famous ‘It’s not just food…’ strapline?