Will Waitrose's new ‘food ambassadors’ really make much of a difference? 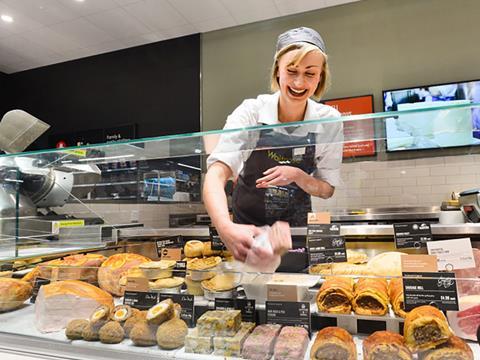 Waitrose staff, or ‘food ambassadors’, will receive a reduced bonus, but at least they’ll receive more training (or so it promises) so they can lead tastings and advise customers further about their food and drink choices

Signalling that its half-year profits will be “close to zero” and announcing that a further five Waitrose stores are closing (potentially impacting 200 employees), it was hard to overlook the doom and gloom descending on the John Lewis Partnership at its analyst and media strategy day this week. We’ve known for some time that Waitrose has been struggling, but with the department stores sucked in to the high street crisis, while hardly surprising, chairman Sir Charlie Mayfield struggled to convey any good news, as he admitted that the partnership was losing the battle on a number of fronts.

It was important “not to try and soft-soap anyone and say it will all be OK and the sun will be coming out soon”, he stressed, as he outlined the partnership’s 10-year strategy. “We must all feel the jeopardy of what is going on in retail right now.”

The strategy involves a further £500m of cost savings over the next three years (following the £750m it pruned from costs in the past three), halting new store openings, and investing in existing stores, but also new products and services, with a particular focus on own-label goods, both to provide uniqueness and differentiation, and to make price comparison that much harder.

Yet there was some good news at the strategy day, and unexpectedly it came from Waitrose. Having gone through the ringer in the past two years, with mass redundancies, six store closures, and the introduction of a painful ’Modern Waitrose’ restructure, profits plummeted. But despite the five further store closures, Waitrose MD Rob Collins said he expected the grocery arm to be profitable this year. And having got to grips with its gross margin (which was worse than the supermarket had expected at the end of last year), he promised that operating margins would jump from 2.7% to 4% by 2021.

The improvement in trading offers a rare glimmer of hope for partners, who earlier this year saw their yearly bonus cut for the fifth year running, and face the prospect of another cut in 2019, with lower overall full-year profits also forecast by Mayfield.

But Mayfield was at pains to stress the sense of a collective. The strategy was dubbed ’It’s Your Business 2028’. And in a further sign of introspection, he also announced that the two fascias will be updated, to emphasise the differentiation of the business model through its partners. That means all the department stores will be rebranded as John Lewis & Partners and the supermarkets will become Waitrose & Partners.

How this will play with consumers – whether they have any interest in stores as anything other than showrooms in an internet retailing world – is hard to say. And it’s not the only new colleague initiative unveiled.

All Waitrose’s partners will be given the title of *drum roll* ‘food ambassadors.’ That’s right. Waitrose staff will receive a reduced bonus, but at least they’ll receive more training (or so it promises) so they can lead food tastings and advise customers further about their food and drink choices (while also stacking shelves and manning the tills), and for added measure, Collins also pledged to only recruit partners who have an interest in food in the future.

Waitrose has only recently introduced healthy eating specialists (there will be 100 in select stores by the end of 2018), and the jury is still out on what sort of difference these will make in store. It also boasts 700 specialists in its stores across wine, fish, cheese and fresh produce. So it will be interesting to see if the new job titles (and training) provides a further fillip, or is merely a gimmick that staff (sorry, partners) see through.