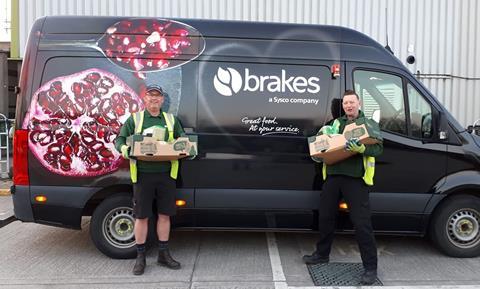 Brakes plans to grow its domestic supply side of the business

The results posted this week on Companies House show the foodservice giant record a 2.1% increase in turnover to £4.28bn.

The loss came in the wake of £39.3m pre-tax profit from the previous year. However operating profit before exceptional items came in at £72.7m compared to £75.5m. It is understood Brakes made significant investments in technology to integrate its France business and the Davigel operation it bought in 2015.

Brakes owner, US foodservice operator Sysco said the results reflected a ‘solid performance’ across most of its businesses in Europe.

“In the UK, Brakes benefited from the investments we’ve made in the breadth of our food range, with a specific focus on fresh, for which we were recognised through our performance at both the Q Awards and the Chefs’ Choice Awards,” said a Sysco Europe spokesman. “We’ve also continued to invest in service, with a particular focus on e-commerce, sales and service support, as well as significantly upgrading our vehicle fleet, helping to ensure that we remain the UK’s leading foodservice wholesaler.”

In the results statement Brakes director Michael Ball said it had “seen a marked decline in our turnover with Q4 2020 levels expected to be significantly below prior year,” due to the coronavirus crisis.

He said Brakes planned to expand its domestic and public sector customer base as the wholesaler continues to shift its business model in order to mitigate the loss of revenue, utilise its fleet and leverage stock across its networks.

“The company is actively looking to expand its customer reach to domestic supply through the existing distribution networks and in the UK to generate income from supplying our distribution services to government agencies,” said Ball.

According to the report the American-owned company is now taking a “prudent and vigilant approach on all expenditure,” with all capital expenditure projects deferred.

The Grocer reported last month that hundreds of Brakes employees had been entered into a period of consultation as the business struggled with the loss of its commercial customers.