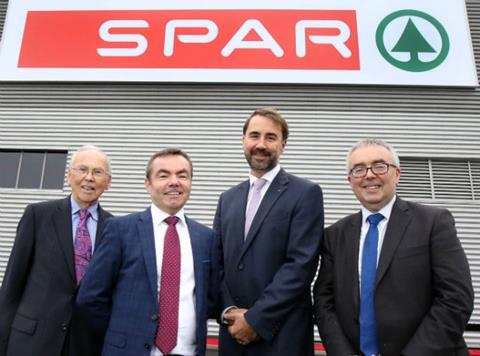 The new warehouse for storing ambient products is located at its headquarters in Mallusk, just outside Belfast.

The new product layout is as similar as possible to that of its stores to simplify the distribution process, while the addition of eight new loading docks will help load double deck vehicles more efficiently. The installation of motion sensors on mechanical handling equipment such as forklifts is designed to save energy.

The move comes as part of a £30m redevelopment for its headquarters, including land acquisition and new buildings.

The first phase saw a £3.5m investment in Henderson Group’s new office building based in Mallusk.

The Henderson Group’s next phase is launching a £12.5m redevelopment of its chilled and frozen distribution warehouse on the site.

“Henderson Group has seen excellent growth over the last 10 to 15 years and we outgrew the site that we had. When the premises adjacent to our site became available in 2015 we purchased them and began planning and developing a completely new warehouse, one of the biggest of its kind in Northern Ireland and doubling our previous warehousing space,” said Henderson Group MD Martin Agnew.

“It was ideal as this location is excellent for the delivery of goods arriving from Larne and Belfast ports and has good access to 447 stores across Northern Ireland that we supply. We looked at all of the new logistics techniques being used by warehouses in the Spar International network across Europe, South Africa and China and considered what was best for us.”

Spar International MD Tobias Wasmuht opened the new warehouse on 20 September during a visit to Northern Ireland for the Spar International Logistics and Technology conference, which hosts 200 delegates from all over the world.

“We have been working with the Henderson Group for over 50 years to enable Spar to deliver to retailers and customers in Northern Ireland and investment in this new warehouse is an important step forward in allowing the brand to continue as the market leader in convenience retailing,” said Wasmuht.

“Our focus is on listening, adapting and fine-tuning our international best practices and combining the best of global with the best of local and the cutting-edge warehouse is a prime example of that. We work closely with our local partners to use their strengths combined with ours so that we grow together.”