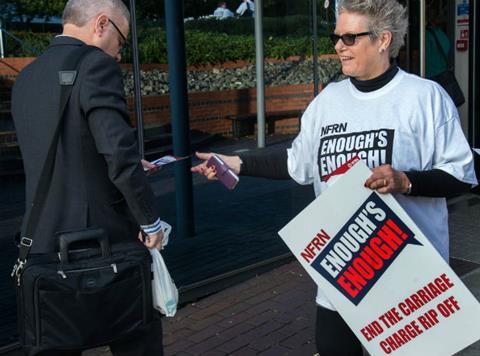 Some 30 retailers have gathered outside the head office of Smiths News to protest against the news wholesaler’s poor service and increased delivery charges.

Demonstrators from across the country rallied at Rowan House in Swindon on Monday with placards exclaiming ‘enough is enough’.

The protest was organised by the National Federation of Retail Newsagents after Smiths News announced it would increase delivery charges by almost 4% in November.

NFRN national president Linda Sood said: “This morning’s protest shows the strength of feeling against the increases in the financial burdens placed on independent retailers by wholesalers like Smiths News.

“These charges are putting in jeopardy many businesses and the service they provide to their local communities.”

Smiths News COO Jon Bunting told demonstrators during a “constructive” meeting he would be reviewing their concerns in the next few days, according to NFRN chief executive Paul Baxter.

“Today’s protest shows that independent retailers are no longer prepared to accept the ever-increasing costs and diminishing levels of service,” said Baxter.

Sood added that the NFRN was “prepared to give Smiths News a window of opportunity to address our concerns”.

A spokeswoman for Smiths News said: “We welcome the opportunity to talk directly with our customers when they have any issues or concerns, yesterday was no different. We share their passion to maintain a sustainable and efficient route to market for newspapers and magazines, one that has the retailers at its heart. We will continue to work with the NFRN, as we have done for many years, to achieve that.”