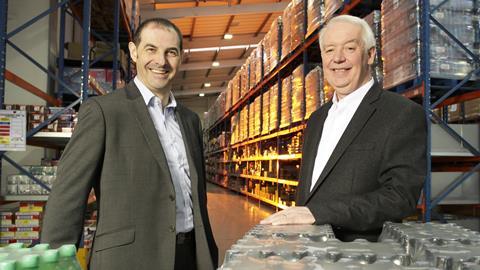 What does Kitwave Group’s IPO mean for the business and what comes next?

The family-owned business is only the second food and drink wholesaler to be listed from The Grocer’s Big 30 Wholesalers, following Booker, which trades as Tesco.

The Initial Public Offering has seen “strong investors” pour £82m into the North Tyneside-based business, with dibs on shares said to be “oversubscribed” ahead of its 24 May listing, resulting in a valuation for the company of £105m.

It will trade with the ticker ‘KITW’, issuing 70 million shares, with senior management retaining 22% of the business. The initial IPO will wipe its £76m of existing debt, a legacy of Kitwave’s steadfast decade-old buy-and-build strategy.

So what does the IPO mean for the business? And what is the strategy from here?

“It’s something I always wanted to do with this business,” explains Kitwave founder and CEO Paul Young. “It gives us a launchpad from which we have no debt and our employees are safe.

“We are now in a position where we can move the business forward from the position of both organic growth and further acquisitions, so it’s a resetting of the clock in many respects.

“Also there is the reputation of the IPO, and that higher profile which comes with it. The IPO is our foundation.”

The wholesaler, which saw revenues reach almost £400m for the financial year ending 30 April 2020, has evolved from only offering an ambient range of products when it was formed, with a single confectionery cash & carry in 1987, to now distributing chilled and frozen goods.

But the “watershed moment” for the company, says Young, came in 2011, when its growth strategy shifted to focus on mergers and acquisitions, overseen by then newly appointed FD David Brind.

That new direction was made possible with two private equity investments, one in 2011 and another in 2016. As a result, Kitwave purchased 11 family-run wholesale businesses, which make up its estate of 26 depots and 1,100 staff today.

So far, those family businesses have continued to operate as separate brands, a strategy Young now aims to overhaul over the next five years. The consolidation will see goods from the various divisions delivered to customers in one ‘Kitwave’ shipment.

“Our customers at this moment in time don’t recognise Kitwave,” explains Young. “We have built a comprehensive range of products and a national delivery capability, so now we are in this position with IPO backing to say to our customers, well actually we can give you a complete one-stop shop if that’s what you require.

“This will be the establishment of the Kitwave name over the next five-year period. The customer will see one order, one invoice and one delivery.”

As for further acquisitions, Brind says his approach will continue to focus on the independent trade. “We’re not going to be stuck on a particular criteria of a turnover target,” he says. ”We don’t focus on turnaround or distressed businesses.

“Our focus is well-run, profitable businesses that add incrementally to the Kitwave Group.

“The average size of businesses we have acquired historically is in that £15m to £40m revenue bracket. That will be the continued focus for M&A for us.”

The group is eyeing foodservice wholesalers as well as its core retail distributors, despite the dire 14 months of suppressed turnover the majority have suffered in lockdowns. For Brind, the resilience shown by the sector in response to the pandemic means “it will be an area of growth for us”.

Kitwave has also invested in fitting out new Wakefield premises for its on-trade division HB Clark, which saw sales dry up completely after its customers were shuttered under coronavirus restrictions.

By contrast, internal adjustments will be kept to a minimum. “There won’t be a fundamental change in the way Kitwave operates,” says Young. “From an ops angle we have probably grown larger than we needed to be but that has meant we are ready to take the business forward with the current team.”

But what of Kitwave’s approach to communication? Over the past 34 years, it has been able to scale up under the radar, gaining a reputation as publicity-shy among its rivals. Now, as a public company, the group will be required to communicate regular updates to its shareholders, which will be subject to scrutiny.

“Public companies have to be demonstrably much more transparent,” explains Shore Capital’s Clive Black. “Secrecy and listed companies do not go well.

“A private company can keep its head below the parapet. For a public company that just isn’t an option. A listed company can expect to produce interim and preliminary results, hold an AGM, publish an annual report and provide at least one trading report each year.”

Young sees it as natural progression. “Someone said to me, does it not seem odd to be moving from a family business to a floating business and losing that level of control? But it has not been a family-run business for many years. It’s been a business run by the management team, moving from solo investment to private equity investment to IPO.”

So it will continue, he argues. “It’s our policy to drive the business forward and its investors’ role to support that and criticise or comment on that. But the strategy and the control comes from the management team.”

The business also benefits from its experience of PE involvement, making it “used to working with an additional management team”, he adds.

The newly listed wholesaler may also need to manage its relationship with buying group Unitas Wholesale, where Kitwave Group is one of the largest members, having previously been part of Sugro. Unitas’ trading decisions could trigger shareholder reactions to the newly listed company.

However, Brind says Kitwave will remain a member of the buying group, while Unitas’ newly appointed MD John Kinney says he sees “no impact operationally to our relationship”.

“They are valued members and also a supplier to our members and I see no reason to expect any conflict of interest,” adds Kinney.

For Brind, there is no need for such a change. The IPO represents an exciting new chapter for the group and its staff – but the story is already established. “We shall continue to drive forward in a market that we believe in,” he says. “Paul has driven the ethos of that for many years and it will continue for the foreseeable future.”