Amazon’s acquisition of Whole Foods Market shows it is determined to dominate all areas of retail. The deal precipitated a collapse in the share price of the world’s supermarkets, with Walmart’s dropping 6% in the US, and Tesco and Sainsbury’s down 3% in the UK. 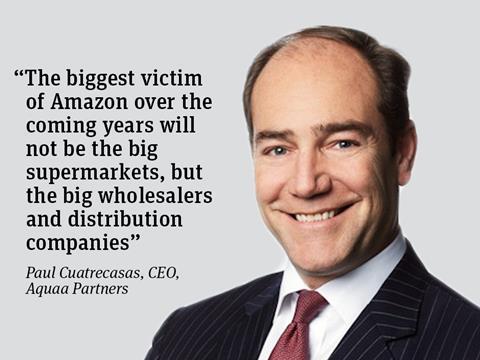 But I believe the biggest victim of Amazon over the coming years will not be the big supermarkets, but big wholesalers and distributors. The wholesale market is a perfect candidate for disruption. Technology has consistently eliminated middlemen from traditional business models.

This disruption could be mitigated if wholesalers were tooling themselves up with their own technology. But they’re not. Many wholesalers are content to carry on as they always have.

According to Frost & Sullivan, only 10% of business-to-business wholesaler transactions are conducted online. The number of wholesalers who use big data, analytics and machine learning to drive efficiencies in their businesses will be even smaller.

Wholesalers may have convinced themselves that because the tech giants haven’t moved into the wholesale space yet, they won’t. There is no reason to believe this. In April, Amazon quietly launched Amazon Business UK, a B2B marketplace for office supplies. It’s conceivable that Amazon is using this platform to road-test its B2B offering before targeting other, larger, wholesale sectors, like food.

With the Whole Foods deal, Amazon now has more reason to get to grips with the food wholesale and distribution supply chain. But rather than view this disruption as a threat, wholesalers should see it as an opportunity to acquire technology companies themselves to take the competition to Amazon - as well as steal a march on their own competitors. US Foods recently acquired data analytics company Food Genius, giving it access to new technology to gather, track, and monitor granular foodservice data.

The wholesale market will be disrupted, sooner or later. But if wholesale executives see technology as an opportunity, and seize it, they can not only see off the threat, but drive a whole new generation of growth.