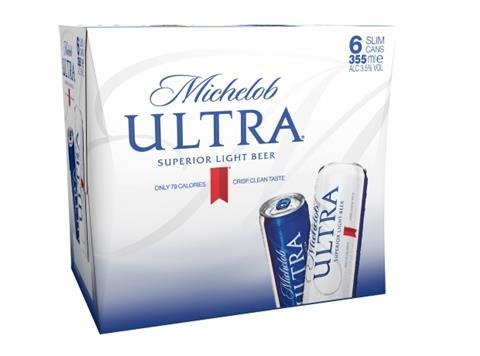 AB InBev is bringing its US light beer brand Michelob Ultra to the UK.

It will launch into the on-trade next spring in bottle and on draught.

The launch will be backed by a national multimedia ad campaign encompassing print, digital and OOH, playing up its “light qualities and functional benefits”, as well as “large scale brand partnerships” which are yet to be unveiled.

Drinking beer “can sometimes seem at odds with living an active life”, said Michelob Ultra senior brand manager Matt Leadbeater. “But it doesn’t have to be. Michelob Ultra has been a runaway success in the US and other new markets globally and we’re confident we can replicate that in the UK as more people look to brands that suit their balance of an active and social life.”

It’s the latest in a series of low/no-alcohol plays from the brewing giant, which last year resurrected Bud Light in the UK with great success: the 3.5% sister to Budweiser had already racked up £35.4m in value sales by this spring [Nielsen 52 w/e 21 April 2018].

It followed Bud Light with the launch of 0.0% abv Budweiser Prohibition Brew in autumn 2017, which, by April this year had already pulled in £1.1m in value [Nielsen].

AB InBev has vowed 20% of its global beer volumes will come from low/no-alcohol products by 2025.