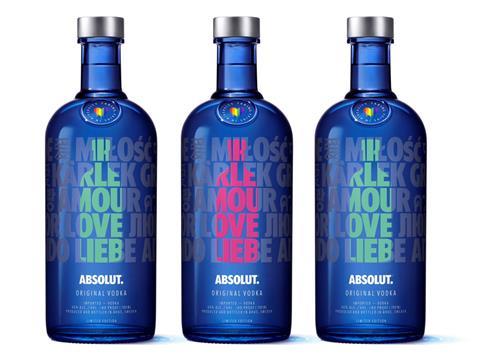 Absolut has created a limited-edition ‘Drop’ bottle adorned with ink extracted from ‘hate signs’ from across the world, repurposed to spread a message of love.

The ink was then extracted and dried by one supplier, who mixed it with coloured ink to print the word ‘love’ in multiple languages on the bottle.

The bottle itself is made with 70% recycled glass, including some from previous Absolut limited-edition bottles. It rolls out from 1 February (rsp: £19.45/70cl).

It will be backed by a £1.3m campaign, including a 20-second TV spot and digital push run in partnership with LGBT+ charity Stonewall, encouraging shoppers to make an online pledge to be an ‘ally’ to the LGBT+ community.

The brand is a longtime advocate and supporter of the LGBT+ community, and releases an annual limited-edition bottle coloured like the iconic rainbow flag.

Absolut head of marketing Chris Richards said: “We’re also delighted to continue our support of the LGBT+ community, continuing our partnership with Stonewall as part of this campaign, but also by proudly showcasing a ‘Take Pride in Diversity’ medallion on the bottle.

“We know our annual PRIDE limited-edition bottles are collectors’ items for many and with this limited edition, we hope to capture attention for this cause.”