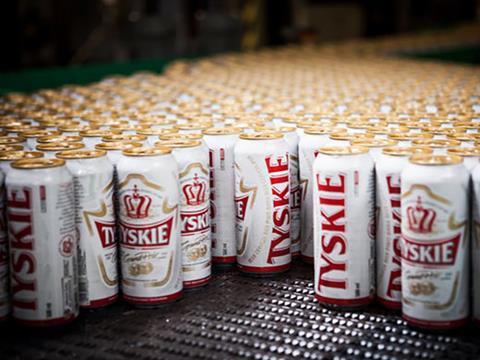 Asahi UK has slashed the alcohol content of its strong Polish lagers Tyskie and Lech.

The brewer has ditched glucose syrup from both beers’ recipes, dropping Tyskie’s abv from 5.5% to 5% and Lech’s from 5.0% to 4.8%. Additional barley malt had been added in its place, said Asahi, to “ensure the same original taste of the beer is maintained”.

The change also brought the brands into a lower duty bracket and it is understood Asahi has lowered its cost prices. A spokeswoman stressed shelf prices were decided by retailers, but added “certainly the savings on the excise rates have been passed on to our customers”.

The move was spurred on by consumer research undertaken by the Polish arm of the business, which revealed customers saw ditching glucose in favour of more barley malt as “a more authentic brewing method”.

The brands’ packaging has been updated to reflect the changes in recipe, but pack sizes remain the same.

It follows a similar move by AB InBev across Budweiser’s portfolio earlier this year, when the mega-brewer “harmonised” the abv of draught and packaged Budweiser to 4.5% - they had previously come in at 4.3% and 4.8% respectively.

The news comes as Asahi UK announced earlier this week a massive marketing push behind its recently relaunched Super Dry lager, which will see ads roll out across London alongside a “heavyweight” social media campaign.

It has also teamed up with a series of film festivals and events across the summer.